The magician in his robe is a timeless image. From ancient wizards like Merlin to medieval conjurers, all the way up to modern depictions such as Gandalf and Harry Potter, the robe is the magician’s expected uniform. Even various schools and traditions of modern occult study emphasize the importance of wearing a robe. It is practically required that any modern occult practitioner has at least one robe – unless you’re Meredith Graves, and then you can get away with a magical jumpsuit. I asked her about her ritual jumpsuits.
END_OF_DOCUMENT_TOKEN_TO_BE_REPLACED

This post doesn’t represent a completed project, but is rather the beginning of one. While leading a discussion group on the Sefer Yetzirah recently, I was struck by many of the astrological details in that ancient text. This led me to start seeking information on the use of astrology in traditional Kabbalah. This has been a frustrating search with many dead ends, but I have found some good clues and interesting places to start digging.
END_OF_DOCUMENT_TOKEN_TO_BE_REPLACED

The Western Mystery Tradition, Western esotericism, occultism — what are all of these things, and why are so many people talking about them? It can be tough to wrap your head around how much of our culture is steeped in ideas we call occult. Everything from religion to pop culture to (gasp!) science are heavily influenced by esoteric, occult traditions that have waxed and waned in dominance in the West.
END_OF_DOCUMENT_TOKEN_TO_BE_REPLACED

I really like Tarot. I have a few decks, but not as many as a collector. A deck catches my attention when it has an interesting approach to classic early 20th century esoteric Tarot themes, so when Taylor Bell showed me his new Sigil Arcanum Tarot, I was intrigued. This is not a typical Tarot deck – there aren’t even any people in it. Instead, it has a plain black background with vibrantly colored, abstract line art. You can tell right away that that the designs are inspired by the Tarot. They are mesmerizing.
END_OF_DOCUMENT_TOKEN_TO_BE_REPLACED

The Lovers is the 7th card in the Major Arcana, so it’s number VI, because we start counting at zero with The Fool. As I frequently point out during tarot readings, every six is about love in the Tarot. Sometimes it’s not so obvious, such as with the Six of Swords, and sometimes it’s too obvious, such as when the name of the card is “The Lovers.” For this breakdown, let’s take a look at the Rider-Waite-Smith version of the card.
END_OF_DOCUMENT_TOKEN_TO_BE_REPLACED

I am now booking live online Tarot readings! You can click here to book a reading.

These readings will be done via Skype using my spiffy new video camera, and I’ll be using a variety of decks. They will typically be five or seven cards, depending on the topic and how deep we need to go. 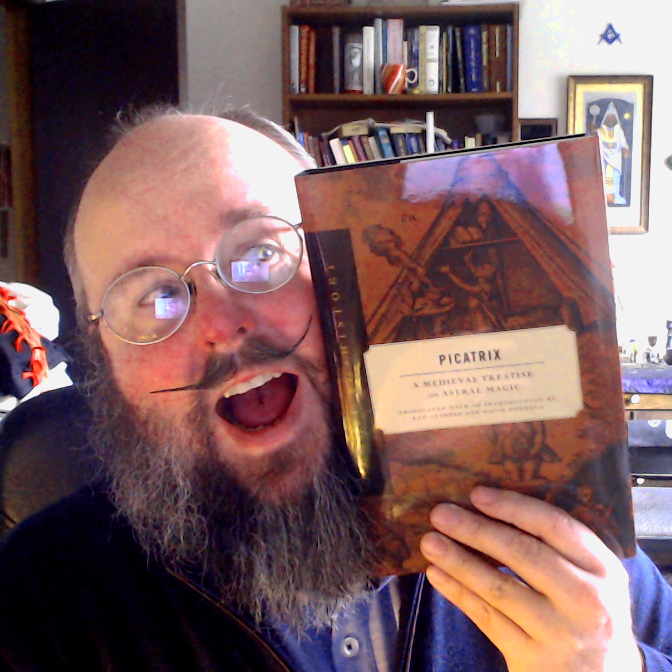 Reverend Erik and a new book, using his new webcam

Today a Tarot deck is a fairly specific deck of cards. It has around 22 Greater Arcana, from The Fool through to the World, and then 56 Minor Arcana including the pips and 16 Court Cards. However, Tarot cards aren’t the only cards out there being used for divination, insight, or other non-game purposes. Let’s look at a few such decks that I use and enjoy.
END_OF_DOCUMENT_TOKEN_TO_BE_REPLACED

Ritual meals are an ancient human tradition, dating back at least 12,000 years. When it comes to Hermetic tradition, such as it is, the Asclepius or Perfect Discourse has vague instructions and a prayer for a ritual meal in its final chapter.
END_OF_DOCUMENT_TOKEN_TO_BE_REPLACED

Arnemancy
MAB EP 46 – An Exploration of the Soul

In this episode of My Alchemical Bromance, Erik explores various interpretations and explanations of the soul in the wake of the death of his 19 year-old cat, Kublai Khan. This episode is personal, but hopefully it provides food for thought.

Support My Alchemical Bromance on the Arnemancy Patreon!

I haven’t written about a Tarot card in quite a while, but in honor of Nathan Lee‘s new podcast, Six Of Swords, let’s look at that card!