Travis Lawrence is an artist, printmaker, explorer of symbolism, meddler in metaphor, and allegorical adventurer. In this episode, guest co-host Coleman Stevenson of the Dark Exact joins me to dive into Travis’s history with art, the method behind his creative vision, and some of the mysteries behind his amazing work.

We explore Jungian psychology and esoteric influences including Hermetic Qabalah, Alchemy, and Freemasonry. Travis reveals the meaning behind a mysterious phrase that shows up in some of his art, and we ponder carving my front porch into a woodcut of its own. 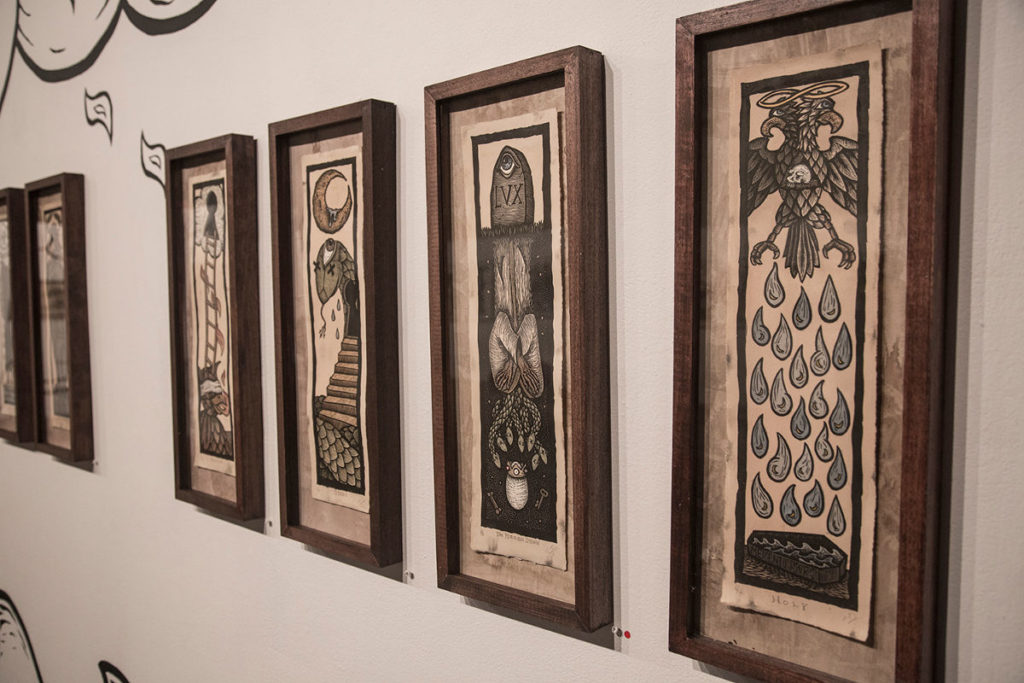 In March of 2020, during the COVID-19 shutdown of pretty much everything, many Masonic Grand Lodges in the United States and Canada cancelled all lodge meetings and Masonic functions. While necessary, this was disappointing, particularly because I had several lectures lined up at various lodges on a number of topics. In addition, both Esoterika Lodge №227 and Research Lodge of Oregon №198 had a joint meeting planned with some pretty incredible lecture topics lined up.
END_OF_DOCUMENT_TOKEN_TO_BE_REPLACED

Changes have been happening on the Arnemancy website! And they are good changes, too: we have added an online shop, new services, and classes, while still continuing to produce podcast episodes and blog posts.

END_OF_DOCUMENT_TOKEN_TO_BE_REPLACED

Earlier this month, I was a guest on The Word Witch Podcast, where I discussed The Chariot, The Tower, and the Sevens of the Tarot with amazing host Claire Burgess. Here’s what they had to say about the episode:

In this tarot lesson episode, Claire is joined by Reverend Erik of the Arnemancy podcast to guide you through The Chariot, The Tower, and the Sevens! This deep and meaty conversation contains lightbulb moments for both Claire and Erik, and it also offers the most laughs you’ll probably ever hear about The Tower. (Read the rest here!)

Claire’s new deck, the Fifth Spirit Tarot, will be launching on Kickstarter on March 20th — that’s two days from now! Check back and I’ll have a link for you.

In the meantime, make sure you check out The Word Witch Podcast!

Last weekend I had the pleasure of attending the Northwest Tarot Symposium. This annual event is focused on cartomancy, including Tarot, oracle, and Lenormand. It consists of a series of talks and workshops, alongside a really entertaining metaphysical fair full of vendors and readers that’s open to the public. This was my first year attending any of the talks, and I learned some interesting stuff and new techniques – oh yeah, and there were skulls.
END_OF_DOCUMENT_TOKEN_TO_BE_REPLACED

Abigail Atkins of Discordian Astrology joins me in this episode to discuss various aspects of modern and Kabbalistic astrology. Abigail has studied ritual magic and methods of esoteric spiritual development for nearly a decade, and implements astrology as a means of discovering the Holy Guardian Angel and the soul’s destiny in this lifetime.

Unlike other episodes on astrology, this episode focuses on modern astrology. We discuss synastry, or the comparison of two charts, alongside integration of the slow-moving outer planets and fast-moving asteroids. In addition to this, Abigail integrates her astrological practice deeply into her spiritual practice to produce a unique and enlightening map of reality.

This episode was recorded back in October 2019, and I have to apologize for taking so long to release it.

You can get links to free weekly horoscopes and interactive Tarot readings on the Discordian Astrology social media accounts.

My guest in this episode is Douglas Batchelor, host of the What Magic Is This? Podcast and veteran occultist. This is a continuation of my guest appearance on his podcast, where we started with a broad view of Heinrich Cornelius Agrippa’s work and and life. In this sequel, we do a deep dive into Agrippa’s Fourth Book of Occult Philosophy, a fascinating work which contains such occult classics as the Heptameron and the Arbatel. It’s the grimoire episode you’ve been waiting for!

This was a really fun one. I was on What Magic is This? with host Douglas Batchelor to talk about occult legend, super wizard, and proto-feminist Heinrich Cornelius Agrippa!

Douglas did an incredible job on the show notes for this, so make sure to check out the episode page on his website. From his notes:

Occultist. Theologian. Mercenary. Soldier. Physician. Spy. Scholar. Legal Expert. Peripatetic Polymath. Prisoner. Heretic. Certainly someone who lived a full life, Heinrich Cornelius Agrippa looms large over the Occult, and is an obvious addition to the Fools Gallery. He is certainly one of the Titans of Magic, anyone seriously interested in the Occult must give Agrippa his due. In one book (or three) De Occulta Philosophia, it was Agrippa’s contention that there could be a synthetic vision of magic whereby the natural world combined with the Celestial and the Divine.

Montana Jordan joins me to talk about spirits, demons, and ghosts — or energies, as she calls them. In addition to being a recurring guest, Montana appears on the Travel Channel show “It Feels Evil,” in which “a team of demon hunters investigate the darkest hauntings across America.”

But this is where I had questions: most paranormal investigation shows approach their topic from a Christian worldview, where pretty much everything is considered evil and scary. Montana helps clear up her views on the spirit world and we explore the question of good and evil in spirit interactions.

Exciting news, everybody! I am now offering online classes. My first class is Introduction to Sigils, based on a class I taught a couple of times at INVOKE here in Portland. Here’s the description:

From the seals of the Goetic spirits to the magical artwork of Austin Osman Spare, sigils are a cornerstone of magical work. They have been part of the Western esoteric tradition since its very roots. The art of working with sigils has continued to evolve and develop over time. At its core, a sigil is the perfect method to put the creativity and imagination of the practitioner to work quickly and effectively.

You can visit the new Classes page here or from the menu, and if you are interested in signing up for Introduction to Sigils, click the button below!
Sign Up Now!

More classes will be offered later this year. If you want to stay in the loop and find out before anybody else, sign up for the Arnemancy newsletter!

We use cookies to ensure that we give you the best experience on our website. If you continue to use this site we will assume that you are happy with it. Privacy policyOk