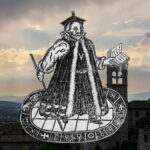 Three Books of Occult Philosophy
What Is Magic?

This episode is part three of our deep dive into Heinrich Cornelius Agrippa’s Three Books of Occult Philosophy. If you feel lost and would like to catch up with the first two episodes, you can find them on the page for this series. In this episode, we will explore Agrippa’s definition of magic, both through… Read more »

On Thursday, September 9th at 6:00 PM Pacific time, I will be running a workshop for my Tarot and the Art of Memory series! Enroll now and strengthen your Art of Memory techniques! If you are interested in taking this class, you will want to take one of my previous classes in the series. They… Read more »

The third Decan of Aries covers the 20° through the 29° of that sign. This year, it lasted from the 9th to 19th of April. This Decan is ruled by Venus, which makes for an interesting combination since Aries itself is ruled by Mars. If you are familiar with the mythology surrounding these planetary deities, I am sure you are already thinking of many interesting implications even before we get to the Tarot card. That card, by the way, is the Four of Wands.

Arnemancy
Bruno and the Future with Scott Gosnell

Scott Gosnell recently finished translating his seventh Giordano Bruno book, Song of Circe & On the Composition of Images. Through this long process, he has become more familiar with Bruno’s work than probably 99.9% of the people on the planet. We have talked many times on this podcast and the Arnemancy blog about how brilliant… Read more »

I was really honored to be a guest on Andrew B. Watt’s new Wanderings in the Labrynth podcast! We talked about the Art of Memory, imagination, astrology, and how all of it fits together. Here’s what Andrew wrote and you can visit the original episode here. Our wide-ranging conversation covers both “memory of image” and… Read more »

Arnemancy
Wizards of the Future with Andrew Watt

Andrew B. Watt joins me on this podcast episode to discuss various visions of the future and how we as magicians, occultists, and wizards can prepare for the future — any future! In particular, we discuss the competing ideas of John Michael Greer and Gordon White, futures both pessimistic and optimistic. We also take a… Read more »