This is a special episode in which I am interviewed about Tarot by Coleman Stevenson of the Dark Exact. This episode is part of the Third Eye Sundays Lunch Session series. Each month, Third Eye Sundays welcomes a rotating panel of intuitive professionals (tarot and oracle readers, psychics, energy workers, etc.) as well as other creatives, counselors, and wisefolk to answer YOUR urgent questions live on Zoom!

The Picatrix Decans cards were created for a couple of different purposes, one of which is to act as physical talismans, empowered as phylacteries or charms to be carried or placed to exude magical effects. There are a multitude of potential procedures to activate and empower the talismans. Every practitioner has their own way of… Read more »

Arnemancy
The Moon and Stars with Ryhan Butler

Algol, Procyon, Antares! Exaula, Algafra, Caaddebolach! In this episode, I am overjoyed to welcome back astrologer Ryhan Butler, who discusses the use of the fixed stars and lunar mansions in astrological magic. Ryhan is great to talk to about this topic, because he can start off with very practical advice about elections and results based on his own experience, then launch into the history behind astrological concepts. 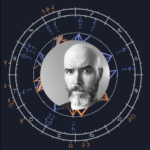 Today, occultists and practitioners are fortunate to have the aid of modern tools like computers to aid in their studies. In this episode of the podcast, I am joined by one of the creators of such tools, Tres Henry. We discuss not only the role of software in magic, but the balance between rational science and mysticism. We also discuss geomancy, maintaining magical balance, and the responsibilities of a magician.

In this episode, I am joined by my friend Joshua Proto (he/they) for a conversation about astrological magic. We discuss a variety of interesting topics, such as spirit-based astrology, how to get started with astrological magic, how to overcome “election paralysis”, and more. Later in the podcast, we drill down into the philosophy of astrological magic, discussing topics such as the golden chain of existence and the concept of ensouling matter through magical ritual.

Arnemancy
The Magus with R.A. Priddle

Mr. R.A. Priddle joins me to explore the world of fraudulent ballooning magicians. No, not the Wizard of Oz, but rather Francis Barrett, author of that famous early 19th century tome of ritual magic, The Magus, or Celestial Intelligencer. Mr. Priddle, or Robert, as I usually call him, wrote his dissertation on Barrett and as… Read more »

What do the grimoires say about ritual purity and the material world? In this episode, Misha Magdalene joins me to discuss the role of the body in grimoire magic. We begin by examining concepts of ritual purity in the Key of Solomon before exploring more concepts from gnosticism to Kabbalah. We discuss ritual purity as… Read more »

My Introduction to Sigils class is once again open for enrollment! I am offering one class on Sunday, December 13th. Use code SIGILCLASS2 in the form below to get 15% off the enrollment fee! That code is good until December 9th. From the seals of the Goetic spirits to the magical artwork of Austin Osman… Read more »

The terms “decan” and “face” are often used synonymously in astrology: a 10° division of the 30° covered by a sign of the Zodiac. In other words, each sign contains three decans, or faces. While each sign has specific relationships with the various planets, each decan does as well. Each decan is said to have… Read more »