When I was just a baby esoteric type, I would frequent herbal shops to make homemade remedies—sorry to anyone who partook of one of those back in the day; I had no idea what I was doing, but at least I didn’t charge! Decades later, my study of cocktail and spirit history (the liquid kind, in this case) has me creating far more potent and delicious concoctions. In a lot of ways, modern craft bartending is a continuation of what healers, alchemists, and other “wise people” have been doing for centuries. So let’s ‘double, double toil and trouble’ ourselves with some booze alchemy.


Join Kevin Carlow and Reverend Erik on Friday, October 29th, at 6pm Pacific for a look at some spooky Halloween cocktails!

Let us begin with angelica, a member of the same family as both carrots and hemlock. Its earthy-sweet flavor adds a bottom note to many gins, and also provides a major flavor of the medicinal-tasting bartender favorites such as Fernet Branca and Chartreuse. It is long-held to have digestive properties, but just don’t go hunting for it yourself in the woods or you might end up with more than a tummy ache. In The Drunken Botanist, herbalist and author Amy Stewart suspects that the mysterious liqueur Strega (“witch” in Italian), known for its saffron content, has a good deal of angelica in it. Strega’s yellow color and bitter-sweet flavor (as well as its witchy name) make it an intriguing choice for spell work. 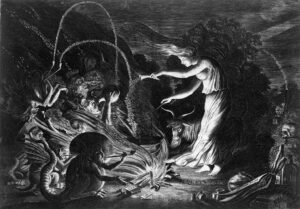 Speaking of saffron, it has many strange properties. Likely a mutant that was never meant to thrive, this delicate crocus is sterile and cannot reproduce by seed. It can only propagate with human help, which has been given gladly for millenia in return for its flavor and color. It has three sets of chromosomes, adding to the inherent strangeness of this magical spice. It’s a key flavor in such things as Old Raj Gin. There is a little saffron hiding in Benedictine and many other monkish delights as well. The saffron robes of Buddhist monks hint at the metaphysical attributes of this flower.

Myrrh is an ancient resin extracted from trees of the genus Commiphora. It has been valued for centuries and referenced in such works as the Bible and “Monty Python’s Life of Brian.” The resin is often used in certain church incenses, as well as Fernet Branca and other intense liqueurs. Myrrh has been added to wine since Roman times, and there is a good chance it is also in your favorite bitters. Stewart says myrrh wine was offered by the Romans to people being crucified. With its melancholic black color and heavy myrrh flavors, Fernet would be a perfect beverage for a Saturnine working. I have used it as a poured libation for symbolizing the shedding of dark energies.

Also referenced in “The Life of Brian,” but consumed much more often than myrrh these days, is juniper. This member of the cypress family has been used since ancient days for stomach, liver, and kidney ailments. It contains many terpenes and other aromatic molecules, such as a-pinene and myrcene. Some of you may be familiar with the latter in the flavor of your favorite beers and cannabis products. It’s the most important—and frankly the only absolutely necessary—flavoring in gin. Oh, also it may have been referred to as “eye of newt” in classic potions. So sorry to all the blind newts out there—I guess it was a misunderstanding. If you do run across a need for “eye of newt” for some reason, you would have history on your side if you substituted juniper berries.

Angostura bitters derives most of its intensity from the alpine plant gentian and not from the angostura bark that may not even be an ingredient. Want a straight shot of gentian’s floral and earthy punch? Try the French apertif Suze, either on the rocks or with soda, and perhaps a slice of lemon. I feel like Suze has a lot of solar energy, it has a vibrant yellow hue and it’s absolutely invigorating with soda and lemon. Perfect for a Sunday afternoon. You can also try Suze in a white negroni.

Stir, serve up with a twist of lemon.

As for all of you who hate the flavor of licorice, what you really don’t like is an organic compound called anethole. This isn’t just found in licorice, but also in such ancient holy herbs as fennel and hyssop. The maenads, fierce wild-women followers of Dionysus, carried a staff called a thyrsus, made of a giant stalk of fennel, as they revelled in the wild places. Feel free to make some for your next bacchanalia, or just enjoy a nice pastis on a sunny afternoon and revel in its complex flavors. Mix your absinthe or pastis with some cold water and a little sugar to create the cloudy louche, of course.

Speaking of absinthe, I think it’s only fair to end this tiny piece of the botanical puzzle with the notorious wormwood. Humans have been using this intense species of artemisia since ancient Egypt for its antimicrobial properties and killing parasites. The Chinese were adding it to wine just as long ago—an early precursor to modern vermouth! By the way, that’s where we get the name for vermouth. It comes from a French pronunciation of the German name for wormwood—it all comes full circle, doesn’t it? It’s also good for such spookily named cocktails as the Corpse Reviver #2 and the infamous Hemmingway invention, Death in the Afternoon—which you should enjoy very carefully.

Death in the Afternoon

Start with the absinthe in a cocktail glass, slowly add the wine, and consume at your own discretion.

Are you interested in some spooky cocktails for Halloween? Check out my column in the Coachella Valley Independent!

Kevin Carlow is an occultist, writer, and bartender. In fact, he has been a bartender and writer for most of his adult life. Having worked in nearly every position in the service industry at some point, he is currently a bartender at Seymour’s. His non-cocktail writing can be found, ironically, at crypticcocktails.com.