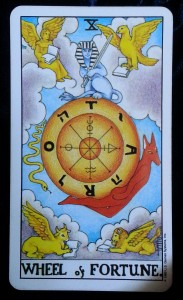 Recently, I was reading for a client who had a lot of questions about the Wheel of Fortune. This is one of the more intimidating and complicated cards in the Major Arcana. We talked at great length about this card and its symbolism. When I drew this card for the Card of the Week, ideas quickly popped into my head. There’s a lot going on in this card, from the symbolism of the wheel to the strange figures on the clouds. Hang on, reader. This post is going to be a long one.

There are two sets of letters on the wheel. First, we have the Latin alphabet, TARO. If you read clockwise, this ends up spelling “TAROT”, but it also spells “ROTA,” the Latin word for “wheel.” If you read counterclockwise, you get “TORA,” which could be a reference to the Pentateuch, or Five Books of Moses, and is referenced on the scroll of the High Priestess.1 The Tarot-Rota connection is one that’s always fascinated me. It’s not in older decks, so it must have been introduced by Eliphas Levi or A.E. Waite.

There’s more symbolism on the wheel. The Hebrew letters are the Tetragrammaton, or ineffable name of deity. Within, are alchemical symbols for the tria prima: salt, sulfur, and mercury. The fourth symbol in the bottom is the symbol for Aquarius.2 It doesn’t match the theme very well. The tria prima show an alchemical progression that can lead one to greater spiritual understanding.

Let’s move on to the figures around the edges of the wheel.

The figures riding the wheel are taken from Egyptian mythology, about which Waite says, “It is legitimate […] to use Egyptian symbolism when this serves our purpose, provided that no theory of origin is implied therein.”3 We have, clockwise from the top, the Sphinx, Anubis, and a serpent representing Typhon.

The Sphinx represents the riddles of life. Typhon is associated with the Egyptian god Set,4 the usurper who rules over violence and destruction.  Finally, Anubis is a god of the afterlife. This is a vicious cycle for sure, but it represents figuring out important mysteries after passing through difficult times, and finally being allowed to rest.

The Egyptian symbols aren’t the only creatures bringing us hidden meanings and complex messages, however.

A Vision of Four Living Creatures

The four angelic creatures in the corners of the card have layers and layers of symbolism attached to them. Immediately, they bring to mind Ezekiel’s vision, wherein he saw “four living creatures,” each with four faces: man, lion, ox, and eagle.5 The four animals show up in other Biblical references, also.

One such reference that Waite would have been familiar with is the use of these animals in the Holy Royal Arch, a deeply symbolic and Kabbalistic degree of Freemasonry. In this degree, they can be said to represent the four worlds and levels of the soul, and are definitely taken from Ezekiel’s vision.6

From an astrological standpoint, the four animals represent the four fixed signs of the Zodiac. The man is Aquarius, the eagle is Scorpio, the lion is Leo, and the ox is Taurus. In this sense, they represent the cyclical nature of the passage of time. But we’re not done. They also represent the four elements and the four suits of the Minor Arcana. It is useful to cross-reference the elemental appearances in this card with those in the World.

Pulling it All Together

Like many of the Major Arcana, the Wheel of Fortune can be a difficult Tarot card to read. The most basic reading is that life goes through cycles. If you’re in a bad place, look for good things to come. However, if you’re in a good place, you can’t just coast through life. You must be prepared for highs and lows. As Sean at Cups & Coins wrote recently, “Everything in life, everything in our day-to-day operation, is merely the turning of the wheel. Things may rise and fall and this is to be expected.”

However, as you can see from the amount of symbolism I touched on in this article, there is a great deal to explore and contemplate in this card. This is one that bears deep contemplation and is an excellent subject for meditation.

If you’d like to learn more about this card, I would recommend the Wheel of Fortune at Biddy Tarot and the Tarotpedia page for this card. I’d love to hear your thoughts on my analysis, as well.