When were some of the first known tarot cards created and do they originate from a specific cultural tradition?

This is a great question, and I’ve been reading and researching a little to see if I could come up with a good answer. I’m not an expert on the history of Tarot cards, so don’t take this as the last word on anything. However, Sherryl E. Smith of Tarot Heritage is such an expert. She’s got a great article on early Tarot decks that’s definitely worth a read. The short answer appears to be that the earliest Tarot decks came out of 15th century Italy. It’s more likely that Tarot evolved from playing cards than the other way around, in fact. 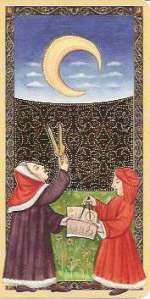 15th century Italy also brought the birth of the Florentine Renaissance, which certainly could have influenced the adoption of Tarot as a fortune telling device. The specific cultural tradition that the cards grew out of is the bizarre melting pot of the Renaissance. 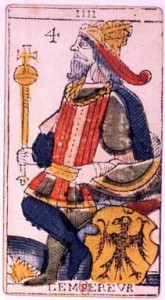 An interesting thing to pay attention to is the age of certain symbols and ideas represented in old Tarot decks. For instance, in Smith’s article, she shares this image of what might be a Moon card from Ferrara. The figures on the card are measuring celestial bodies with compasses. But wait, there’s more. Now take a look at the image of L’Empereur, from the Marseille Tarot. You’ll see that he carries the ancient symbol of the globus cruciger, which has been used to represent secular and spiritual power since the 4th or 5th century. The symbolism of the Tarot is old stuff, implanted in the collective memory and unconscious of our culture for millennia. I’m certain this is what makes the Tarot such a useful tool for self-reflection and understanding.

Get a Free Email Reading

Peter gets a free email reading for having his question selected. You could, too! Post a question about the Tarot in the comments section, and if yours is selected for a Client Query post, you’ll get a free reading!