In the Hermetica, we learn that Hermes Trismegistus has students. The two most prominent are his son Tat and Asclepius. Who is Asclepius? In addition to being a figure from Greek mythology, Asclepius has an entire book of the Hermetica named after him. Let us take a look at Asclepius and learn more about who he is and why he’s important to Hermetic philosophy. 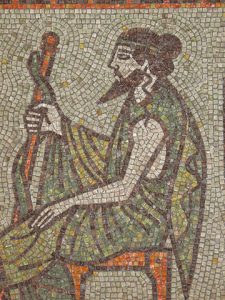 A mosaic of Asclepius courtesy of Wikimedia Commons

To the Ancient Greeks, Asclepius (or Asklepios Ἀσκληπιός) was the god of medicine. He was the son of Apollo, who is probably best-known for being a Sun deity, but also held domain over medicine. Asclepius was such a skilled healer that he could bring people back from the dead. Another account states that Asclepius was taught his healing skills by the centaur Chiron, who counted many Greek heroes among his pupils, including Jason, Achilles, and Perseus.1

Asclepius was so good at bringing people back from the dead that he angered Hades, king of the underworld and god of the dead. Hades complained to Zeus, and Zeus struck Asclepius down with a thunderbolt. In retaliation, Apollo then slew all the Cyclopes who were responsible for forging Zeus’s thunderbolts. After some squabbling, Zeus brought Asclepius out of the underworld and placed him in the sky as the constellation Ophiuchus.2

The Rod of Asclepius

The Rod of Asclepius is a snake twined around a staff, a symbol that is still associated with medicine and healing today. There are many interpretations of the symbol, one of which may come from the legend of the snake which whispered secret wisdom into Asclepius’s ear as a child.

The Rod of Asclepius is often confused with the caduceus of Hermes, which is a winged staff with two snakes twined about it. Neither the caduceus nor the Rod seem to be very important in Hermetic philosophy, though they are pretty common symbols in Renaissance Hermeticism.

Imhotep the Physician and Architect 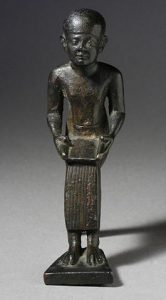 As the Greeks moved about the ancient world, they identified foreign gods with their own. Just as Hermes became combined with Thoth, Asclepius merged with the Egyptian god Imhotep. Imhotep was an Egyptian commoner who probably lived around 2650–2600 BCE. He was the chief architect and physician during the rule of Djoser. He was probably first deified more than a thousand years after his death, and was frequently identified with another deified architect, Amenhotep, son of Hapu.3

Imhotep is the supposed author of the Edwin Smith papyrus. This papyrus is the oldest known treatise on treating trauma. It contains 48 surgical cases of wounds and indicates a broad experience with fractures and other injuries that could only come from a place where such things were common. At least one author suggests that the building of the pyramids would be the ideal place to gain such knowledge.4

This is a convenient coincidence, because Imhotep was the architect of the Pyramid of Djoser. This ancient structure was a step pyramid and also the first successful Egyptian pyramid. Its construction was completed before 2600 BCE. Because of its durability and success, ancient historians credited Imhotep with the invention of stone architecture.5

Asclepius in the Hermetica 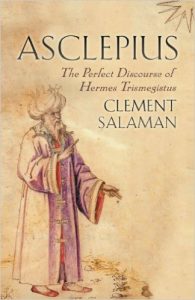 In Asclepius, we learn that the Hermetic Asclepius is actually a descendant of the deified Asclepius-Imhotep. As Hermes explains the nature of the gods, he says:

Your grandfather,6 O Asclepius, was the founder of medicine, to whom a temple has been consecrated on the mountain of Libya, near the Shore of Crocodiles, in which lies his terrestrial part, that is, his body. […] For now through his divine spirit he still furnishes the sick with every kind of aid which previously he used through the art of medicine.
Asclepius 377

The inclusion of Asclepius in the Hermetica is a very interesting one. This has been just a brief introduction to the character. We haven’t managed to cover all the connections between the Greek healer, the Egyptian architect, and the intricacies of their mythologies and cultures. There is much more to explore in the world of Asclepius.

[…] is called simply Hermetica, and was translated by Brian Copenhaver. This version includes the Asclepius, another important Hermetic work, but it’s a more challenging read with plenty of notes and […]

[…] discusses other gods. However, these gods are mostly man-made. Hermes explains that both he and Asclepius are descended from ordinary men who were eventually revered as gods by the Egyptians. Hermes states […]