This post doesn’t represent a completed project, but is rather the beginning of one. While leading a discussion group on the Sefer Yetzirah recently, I was struck by many of the astrological details in that ancient text. This led me to start seeking information on the use of astrology in traditional Kabbalah. This has been a frustrating search with many dead ends, but I have found some good clues and interesting places to start digging.


My hope is not that this article will provide answers, but that it will generate questions. If you read this and have answers to some of the questions, I would love to hear them. If you know of resources or books I should check out, I would love to hear them. Frankly, this seems to be a topic that, if well-explored in any language I’m proficient in, is difficult to research. 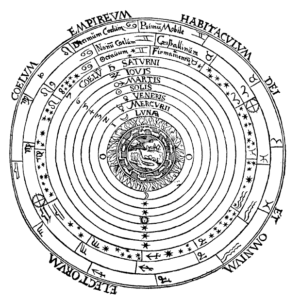 Before trying to understand how Kabbalah and astrology are interconnected, it’s a good idea to take another look at the geocentric worldview which governed middle eastern and European thought for several millenia. In this worldview, the Earth lies at the center of everything, a perfect sphere nested within shells of other perfect spheres. Moving outward, these additional spheres contained the seven visible planets – Saturn, Jupiter, Mars, the Sun, Venus, Mercury, and the Moon – followed by the eigth sphere of the fixed stars. Beyond the fixed stars were various celestial realms.

All of these spheres were connected in a vast chain of being – of celestial cause-and-effect – to form a well-ordered, well-oiled machine of Creation. At the center of this machine, operated on by every influence, is the Earth, composed of the four classical elements of Fire, Air, Water, and Earth.

To get a better understanding of this particular model of Creation, I recommend The Elizabethan World Picture by E.M.W. Tillyard.

The Hebrew alphabet (frequently called the alefbet) consists of 22 letters. In the Sefer Yetzirah, these letters are split into three groups. The first group is the mother letters of alef, mem, and shin. These correspond to the three basic elements which make up all of physical creation: air, water, and fire.

The second group are the seven double letters, so called because they have (or supposedly had at one time) two different pronunciations. Finally, the last group of 12 are the elemental letters, or letters with just one way of being pronounced.

Trying to find old material about astrology in Kabbalah is frustrating. There are books about it, but most of them are in Hebrew and it’s difficult to tell if they contain anything uniquely Kabbalistic. They might just be rehashing non-Kabbalistic ideas or have nothing to do with Kabbalah at all.

Gershom Scholem, the influential historian of Kabbalah, wrote, “Astrology and alchemy play at most a marginal role in kabbalistic thought.”1 However, we see tantalizing hints in other works. The 16th century Rabbi Moshe Cordovero (also known as the Ramak) writes in Pardes Rimonim about colors being associated with the signs of the Zodiac, the twelve tribes, and the twelve jewels on the breastplate of the high priest. The Ramak hints at these concepts being used in magical operations as part of practical Kabbalah.2

Other fascinating clues abound. Through a throwaway reference in a Moshe Idel book,3 I came across Ms. Paris BN heb. 1092, which appears to contain quite a bit of astrology along with interesting astrological signs. My Hebrew isn’t nearly good enough to read it, but since it’s dated 1401-1600, it might predate the Ramak. 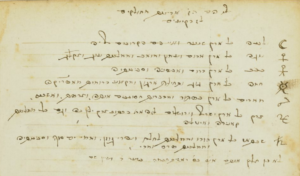 Astrological symbols in a Hebrew manuscript.

Even the more modern teacher of Kabbalah, Z’ev ben Shimon Halevi, doesn’t have many astrological references. He states outright that many ancient mystics were “firm advocates” of astrology in Kabbalah. While Halevi pulls most of his Kabbalistic material from the Sefer Yetzirah, his treatment also gave me a pointer to a passage in the Zohar.4

For there are times when the moon is defective, abiding in judgment, unaccompanied by the sun. Yet constantly, every moment, She has to issue souls into human beings, as She gathered them previously.5

The Zohar is very explicit about stating that the “gushing flux of destiny” depends on מזלא (mazzala), or the sign of the Zodiac, and that merit cannot be gained until the Moon is “filled and illumined by the flux.” Daniel Matt notes that mazzala can mean “constellation, planet, planetary influence, zodiacal sign, destiny, fortune, or guardian angel.”6 This is a fascinating glimpse into early Kabbalistic thought regarding fate and free will, but it doesn’t provide very much to go on in terms of the technical details of Kabbalistic astrology.

So many of these tantalizing clues seem to trace their roots back to the Sefer Yetzirah. It really seems like the place to start.

Astrology in the Sefer Yetzirah

The Sefer Yetzirah is a short, cryptic mystical text dating from somewhere between 100 and 900 CE. There are four primary versions of the text, varying in length from 1,300 to 2,500 words – which means this confused blog post is longer than most of them. This book tells the story of creation, and introduces the concept of the ten sefirot of the Tree of Life.

In chapter four, the Sefer Yetzirah explores the relationship between the cosmos, the visible planets, and the human body. The concept of correspondences between these different “layers” of creation is pervasive in Western mysticism, and in Kabbalah we can see definite Neoplatonic influence. The Kabbalistic view of the cosmos is that it was created as a reflection of God, and in order to reconcile this with the Torah, this means that the cosmos must be a reflection of both man and God. In the Torah, it says “And God created man in His image; in the image of God He created him; male and female He created them.”7

Later Kabbalists created the concept of Adam Kadmon, the Great Light and Primordial Human, who exists as both the cosmos and a template for the creation of humankind.8 The depth of correspondence between the cosmos and man through the letters of the alphabet is key to understanding the Sefer Yetzirah.

The seven double letters were said to correspond to the seven classical planets. The apparent rotation of the sky and the cycles of the planets were seen as integral parts of a vast clockwork cosmos.

The twelve elemental letters are also tied to objects in the night sky. They correspond both with the twelve astrological houses and also with the twelve signs of the zodiac. These are parallel but different concepts. The houses are fixed segments of the horizon, while the signs of the zodiac are fixed segments of the celestial equator. If you stand facing south, the point where the celestial equator intersects the horizon to your left (in the east) is the boundary between the 1st and 12th houses. In Hebrew astrology, the houses are named instead of numbered, and the chart below includes the names of the houses.

With the twelve elementals being placed among the fixed stars, they are further removed from earthly affairs. This is a continued pattern in the Sefer Yetzirah. The three mothers, for instance, govern the elements – the material world in which we live, work, and breathe. The seven doubles govern the senses, or the interface between the material world and the soul. The twelve elementals govern abstract ideas and moods, where the soul reaches out to effect the material world. They are said to channel spiritual sustenance down to the physical world.9

Those who are interested in medical astrology should compare the body parts listed in chapter five with traditional European associations between the signs of the zodiac and parts of the body.

Chapter six begins by hinting at the nature of the Eighth Sphere, that of the fixed stars. It introduces the concept of Teli and, according to Kaplan, focuses on the stars that revolve around the Pole Star. This is an old concept in Western mysticism. The Pole Star, or the star nearest the celestial pole of Earth, appears to be the point around which the rest of the night sky revolves. It has long been thought that this star represents the gateway through which a mystic can ascend beyond the firmament to experience the highest levels of mystical experience.13 In Kabbalah, this would be the equivalent of ascending beyond the Zair Anpin14 to experience the celestial triad of Binah, Chokhmah, and Kether.

We are also introduced to a new reflection between the macrocosm and microcosm. The larger, more abstract concepts of Universe, Year, and Soul correspond to the smaller, more comprehensible Teli, Cycle, and Heart. Try to imagine that there is no distinction between time and space in this relationship. In Hebrew, the word for Universe is Olam, which can also be translated as “eternity.” It implies an infinite amount of both time and space.

Though the Sefer Yetzirah itself doesn’t mention the Lunar Mansions, Kaplan’s commentary spends time on them. These 28 camps of the divine presence are said to be associated with the twelve signs of the Zodiac through a combination with the 42-letter divine name given in 4:14. There are more permutations and combinations of letters given, but perhaps the most interesting thing is that each of the 28 camps is associated with one of the “times” mentioned in Ecclesiastes 3:2-8.15 With Kabbalistic word-play and these clues, I would wager that there are Kabbalistic Lunar Mansion talismans out there somewhere, waiting to be discovered.

I honestly don’t know if I’ve looked into Kabbalistic astrology enough to draw conclusions yet. I think there are many, many directions this line of inquiry could go. Primarily, I believe Kabbalistic astrology would be useful for the creation of astrological talismans, and it could be that previous researchers have already extracted all of the available knowledge on the topic.

It is my hope, however, that somewhere out there on the Internet, there are experts in Kabbalah who will read this, and happily give me pointers where I should be searching next.

[…] stand in front of the Tree of the Knowledge of Good and Evil – complete with serpent – and the Tree of Life, respectively. There is space between them, and while the woman stares up at the heavens, the man […]

[…] early approaches to astrological symbols, images, and meanings before we dive into the meanings of fate and fortune and why those words scare the heck out of […]

Leave a Reply to Arnemancy : Fate and Fortune with Allen Drake Cancel reply