The magician in his robe is a timeless image. From ancient wizards like Merlin to medieval conjurers, all the way up to modern depictions such as Gandalf and Harry Potter, the robe is the magician’s expected uniform. Even various schools and traditions of modern occult study emphasize the importance of wearing a robe. It is practically required that any modern occult practitioner has at least one robe – unless you’re Meredith Graves, and then you can get away with a magical jumpsuit. I asked her about her ritual jumpsuits. 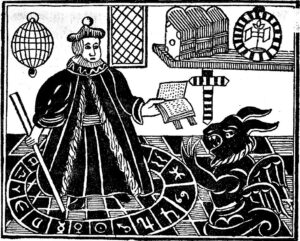 Here you see a magician in his robe, doing typical magician things like conjuring demons.

“There are things a practitioner can feel deprived of,” says Meredith, “and ritual garments are chief among them. If there isn’t a readily available option, they can easily slip one’s mind while busy worrying about the acquisition of other tools for a particular working or tradition. Clothes are fucking important!”

For two decades, I have avoided getting a robe. Yes, two decades. I even read Andrew B. Watt’s excellent blog post “Neglect Not the Robe.” Andrew has a profound understanding of the magical act of sewing,1 and can talk about it at a spiritual depth that I hope to someday achieve.

I read Andrew’s work and I was inspired. I said to myself that maybe someday I’d make a robe. But never today. It was never the time. Then that changed.

Vestment Envy, or the Cultivation of Desire

When the Hermetic Federation decided to charter a lodge here in Portland, they reached out to a few local practitioners, including me. The timing was incredibly auspicious. We dedicated the lodge on the Vernal Equinox, precisely nine Wednesdays before Mercuralia on May 15th. Everything went really well. However, when we prepared for the dedication ceremonies, I discovered that I was the only magician present without a white robe. It was embarrassing, like one of those dreams where you realize you forgot to wear pants to school, only in real life. 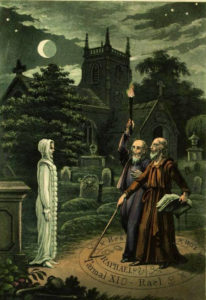 Edward Kelley and a man who is not John Dee, in robes, do typical magician things, like summoning the spirits of the dead.

We each left the dedication ceremonies with a plan to perform nine weeks of Hermes-Mercury workings in preparation for Mercuralia. I based my plans on “Thrice Three Greatest Hermes: A Novena and Chaplet” by Jeffrey S. Kupperman, and dutifully got to work.

Near the end of the period, with the promise of another group ritual coming up, I knew I needed to make a magical robe of my own.

I decided to invoke Hekate on Walpurgisnacht, April 30th, using Leonardo’s adaptation of PGM IV. 2708-2784. The ritual went as planned, but something didn’t feel right. Nothing seemed to happen. I couldn’t tell if I’d done something wrong, or if I’d forgotten something important. But what I did know is that I had a Walpurgisnacht bonfire to attend, so I headed to that.

Upon arriving, the host looked at me and said, “Wow, you look messed up!” I explained that I was not messed up, but maybe it was the effects of the ritual I’d performed. We retired to his back yard for the bonfire, which was amazing. Many offerings were thrown into the fire. As with all great bonfires, time and space went on vacation for a while and something spoke to us in dancing letters of flame.

When I awoke the next day, I realized I was covered in soot. Small bits of burned plant matter were stuck in my beard, my hair, and all over my clothes. I left soot all over the bed – it was speckled with black. It was a mess! But I knew that morning how important it was for me to create my robe immediately.

When one of my closest friends got engaged last year, they asked me to officiate their ceremony. I was thrilled to say yes! I had the honor of meeting her new future in-laws, Mr. and Mrs. Z.2 Not only did we get along really well, but they revealed to me that in their basement was a huge mad science sewing laboratory. 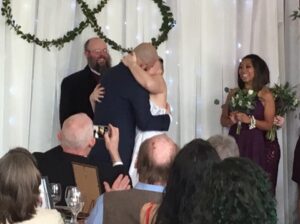 It was incredible – machines the names of which I still don’t know, a quilting robot that looked like the cockpit of a TIE Fighter, and huge tables for laying out cloth and patterns. As our friendship grew, Mrs. Z invited me to help her out in what I was now calling the Sewing Dungeon. Our plans didn’t come to much until I realized that our inaugural project would be my new magical robe.

Mrs. Z was excited about the project, so we scheduled a day to begin work. The timing was eerily auspicious. We began work on the noumenia, the day of the New Moon, and would finish in time for the novena to Hermes that I would perform leading up to Mercuralia. 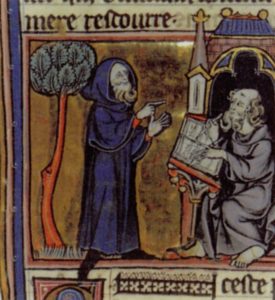 In this medieval depiction of Merlin, he does actual real magician things, like talking too much.

I got five yards of medium-weight white cotton twill and took it to her, along with the “Tailored Robe” pattern from the Servants of the Light website. But she took one look at the pattern and threw it out. She led me through the creation of a whole new pattern from scratch. We set to work measuring, cutting, sewing, and drawing. The new pattern was complex, consisting of 15 different panels, a partial lining for the chest and back, and precise stitching on every corner and seam. That first day, we worked for nearly twelve hours on the pattern, prototype, and finally the robe itself.

After that long day, I collapsed exhausted into my bed. When I awoke in the morning, everything around me was speckled with white lint, spare threads, and unraveled bits from the cloth used in the robe’s construction.

Mrs. Z and I worked a few more hours that next day, finishing up details on my robe. I added cloth-covered buttons and nerve-wrackingly stitched in buttonholes using her computerized sewing machine. Finally, my magical robe was complete.

The Magical Robe in Action

Andrew was right. When he talks about the importance of the magical robe, the process of creation, the toil that goes into it, that’s just part of the experience. When you get to a place where you don your new vestments for the first time, when the robe settles around your shoulders and you feel the weight of the fabric, it changes you. Many magical rituals start with a cleansing, either a bath or a lustration, and when you’re not changing into ritual garb, it’s easy to skip that step or to downplay its importance.

Here you can see me in my robe. Some of the details still aren’t finished, like I haven’t added the buttons and buttonholes.

Wearing magical vestments imbues every motion, every step, every arm movement with mindfulness and intent. Part of this is practical – I do not want to burn my robe’s sleeves in the open thurible – but part comes from the special act of wearing the vestments themselves.

The morning after I came home with my completed robe, I wore it for the first day of the Hermes novena, and during ritual every day until the Mercuralia rites. It transformed my ritual experience.

The Evolution of Magical Vestments

Magic is a cultural phenomenon, and as much as I love reenacting ancient ritual, I know that for Western esotericism to have meaning in the modern world, it must adopt the rainments of the modern world. I’ve written before about how I use modern materials in my craft. I’ve used polymer clay for talismans and replaced tin foil with aluminum. We can see that adaptation in the past has happened along both economic and cultural lines. Compare the down-and-dirty simplicity in The Secrets of Solomon to the expensive accoutrements of The Key of Solomon the King and you’ll get an idea. Practitioners will always work with what they have, and then later generations will struggle to find the same materials and components, even if those are no longer relevant parts of their culture and locale.

I mentioned earlier that Meredith Graves wears jumpsuits for a lot of her ritual work. I asked her to expound on that – how did the jumpsuit become such a key part of her magical garb?

“The jumpsuits are the end result of a lot of reflection on how your core skills and passions enmesh with your craft,” she explained, “how the right tool for anything is the one that helps empower you in your practice, and how one way to counter cultural appropriation and bogus witchcraft is by researching things that pertain to you and where you’re from.”

But Meredith also spoke about how her magical jumpsuits were a part of who she was, the cuture and place that helped create her. “I’m a creeper from the rust belt and Adirondacks, so work wear is a legitimate tradition or folk costume to me. Coveralls and jumpsuits are the perfect ritual garment for a modern traditional witch of my particular stripe.” 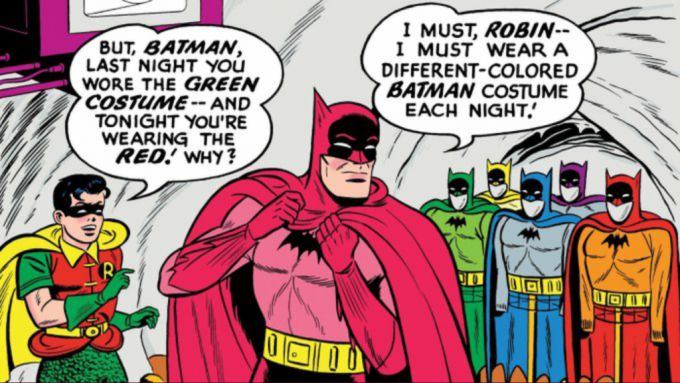 “Jumpsuits can be extended out in a million directions, like different colors in accordance with planetary correspondences,” Meredith explains as she dons her vestments. Just kidding: that’s Batman.

While I was reflecting on Meredith’s words, I was reminded of another tradition that proudly adopted materials and symbols from the culture and economic stratum of its practitioners: Freemasonry. As explained by William Preston, one of the creators of modern Craft ritual:

Tools and implements of architecture (symbols the most expressive!) are selected by the Fraternity, to imprint on the memory serious and solemn truths; and thus the excellent tenets of the institution are transmitted, unimpaired, under circumstances precarious, and even adverse through a succession of ages.3

I agree with Meredith and the Freemasons. As practitioners – whether we are magicians, witches, or Masons – we should be aware of how our work both embodies who we are and influences the world around us. Adopting the materials and practices of time, place, and culture is an ancient element of ritual practice. After all, the truths we seek may be timeless, but the results we invoke are part of the modern world.

This doesn’t mean that we should be taking the easy way out. Magical tools and vestments should be hands-on creations. They should be imbued with the intent, purpose, and toil of the practitioner who uses them. But when you approach the construction of your tools mindfully, one part of that means remembering who you are and the environment and culture in which you work.

You get it! I’m glad that my article from so long ago was so useful in convincing another magician to walk this particular path; and you’ll likely convince a few others to walk this road, too. People will discover all sorts of useful things about this kind of work, in the long run, thanks to this effort on your part. Nicely done.

I’ve already got plans for more magical vestments to go along with the robe. It acts as such a useful base garment — there is much more to be done! Can’t wait to experiment.

[…] sewing and magic on episode 48 of My Alchemical Bromance, and he convinced me that I should make my magical robe during that […]

[…] all need to be created, typically by hand. This can mean picking up skills like woodworking, sewing, painting, and drawing. As magical work becomes more complex, even metalworking and jewelry-making […]

Leave a Reply to Arnemancy : Wizards of the Future with Andrew Watt Cancel reply