Continuing on the Decan Walk, we come to the second Decan of Aries, which stretches from 10° to 20° of the sign. This year, the Sun was in this Decan from March 30th to April 9th. In the Pacific Northwest, where I live, this is the time of year when the Sun is shining more and more, rain showers tend to be a little less frequent, and I complain a lot because the winter didn’t get enough snow again.

The Three of Wands 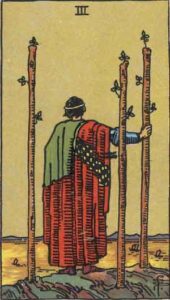 Contemplating this card during this Decan has been tricky for me. I know what the card means to me, but that wasn’t the challenge I faced. I contemplated the meaning of three-ness, its connection to the sefirah of Binah, its meaning as a vehicle of growth and generation. But I started to get swept away and overwhelmed with the number of associations and correspondences that one can encounter by looking at the Decans.

In fact, it wasn’t until I sat down to write this that I really realized that the overwhelming rush of expansion is part of the experience of this card. The Three of Wands is about looking outward, getting bigger, and expanding horizons. In the grand story of the Minor Arcana, this card is the first explosive burst of creation, after the creator becomes aware of itself but before anything truly comes into being as a result of that awareness. Though the Waite-Smith image of the card doesn’t reveal itself, there is chaos here – raw potential, unformed and eager, reaching for the horizon.

Some of this is present in the card’s image. The main character looks outward, just like in the Two of Wands, but they are not contemplative as much as they are commanding. Their fleet of ships sails away, toward the horizon and new discover. There is a possibility that the main character is a conqueror, since their right arm appears to be armored.

None of the threes are particularly stable cards. They all indicate change, with various degrees of control and purpose. This card is about a burning desire for more. Maybe it signifies greed to some extent, but to me it is about ideas taking hold, perhaps assuming a life of their own, and spreading into the world like wildfire or a conquering army.

The growth of the Three of Wands cannot last forever, though, as we will see as the Decan Walk progresses.

The Second Face of Aries

Agrippa and the Picatrix have very different things to say about the image associated with the Second Face of Aries. I’m just going to quote from T. Susan Chang’s Tarot Correspondences: Ancient Secrets for Everyday Readers, since it’s easier than having a dozen grimoires on my desk.

Here is the Picatrix image:

A woman dressed in green clothes, lacking one leg.

A woman, outwardly clothed with a red garment, and under it a white, spreading abroad over her feet.1

If you would like to read more, it is available through Patreon!

[…] card is so comfortable, especially following on the heels of the explosive confusion of the Three of Wands. In the Waite-Smith version of the card, the four wands are propping up decoration, perhaps for […]