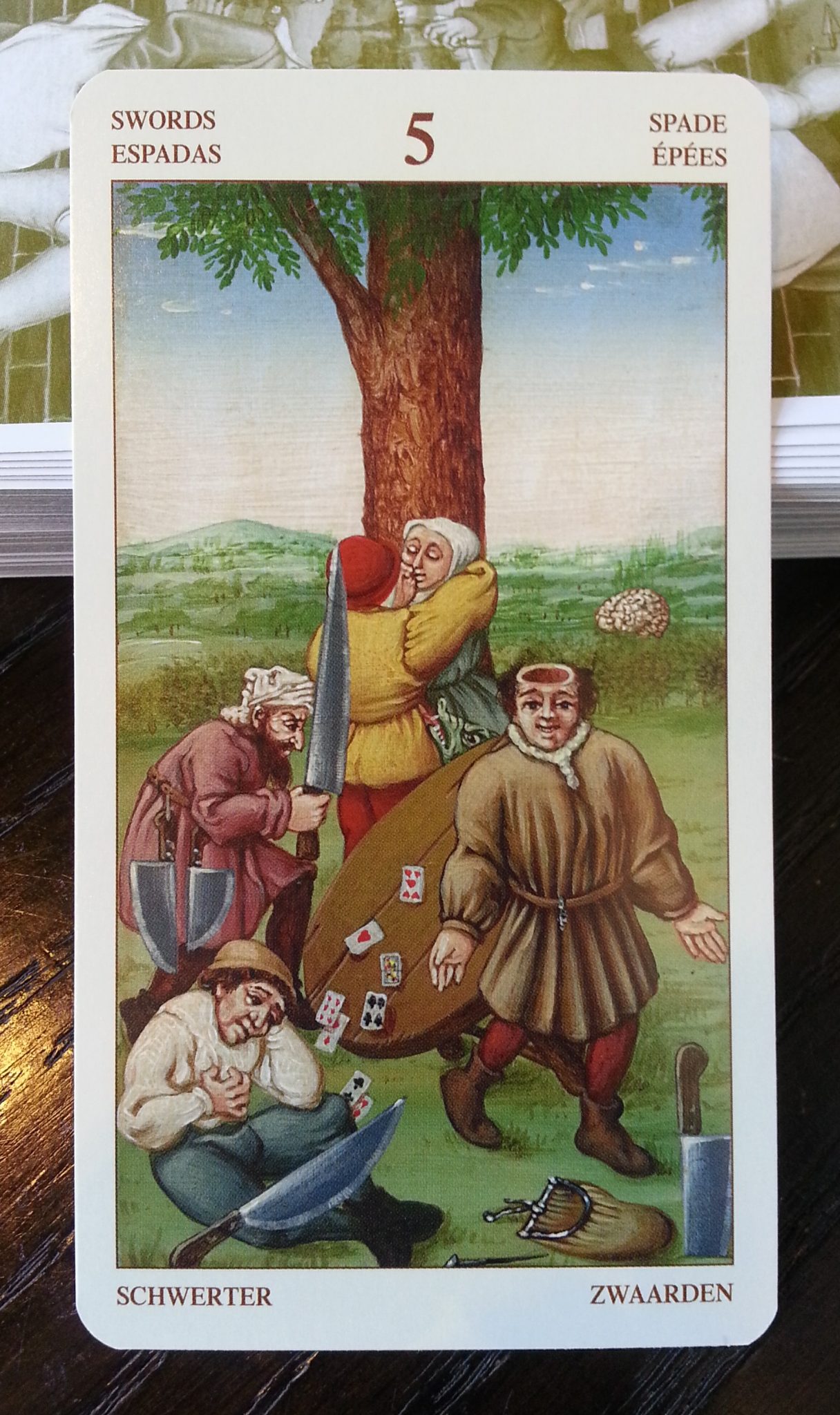 I love this new deck, the Bruegel Tarot by Lo Scarabeo! Before I get  into  the rather straightforward message of this card, please take a moment to look at the image and enjoy the great variety of imagery, both comic and macabre. There’s a man in this card who appears to be the main character. The top of his head has been removed and his brain appears to be flying away while he stumbles cluelessly, grinning like an idiot. In the background, a couple is cupcaking1 beneath a tree, while a card game has been interrupted by a man having chest pains.

True to the classic imagery in this card, a sneaky ruffian is lurking with three of the swords. Oh, and look closer: Behind the upturned card table, some kind of green monster menaces the lovers beneath the tree! What does it all mean?

Prudence is a Good Idea

This card shows lust, gambling, too much excitement, thievery, idiocy, and greed. These are all behaviors we engage in when we lack the foresight of prudence. Short-term pleasures need to be measured carefully. It is far too easy to indulge in them while forgetting their long-term consequences.

The message of this particular card is pretty simple: Don’t trade in your long-term happiness for immediate pleasures. This is a card that urges you to plan for the future, to step cautiously, and to temper your pleasure-seeking in exchange for easier times to come.

Interesting how different the card you showed is from the Rider-Waite deck. The five of swords I have shows me a much different message. I see someone reflecting on past actions and perhaps mistakes he has made, but now has more swords of knowledge at his disposal, but still problems and doubts remain with the two swords on the ground.

Given such differences in messages how would you relate these in a reading if you used one deck vs. the other?

Russell, that’s a great question! It’s worth a longer answer than the short one I’m about to give.

Whenever I read a card, I start with a basic meaning that I try to apply across all the decks that I read with. Then, I apply to that basic meaning the specific symbolism and nuances of the particular deck and card.

That might sound complicated, but I’ve found that it makes the process of learning to work with a new deck much simpler.

In a word ‘intuition?’. One persons interpretation may appear or possibly ‘is’ totally opposed to the other.. But like siblings, they are all relative and loved equally? One man’s meat etc…