Kicking off our Card of the Week feature is the Magician, the second of the major arcana. When I drew this card to write about, I didn’t really believe it. Who would believe that randomly I picked one of the best cards for starting off a new venture? If I was going to purposely select a card for the first post, the Magician is the best candidate. I picked it randomly. No, really. I shuffled a lot. 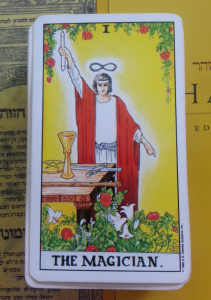 All Your Ducks in a Row

The Magician has all of his tools ready to begin a new undertaking. On the table, all four suits of the minor arcana are represented: Pentacle, Sword, Cup, and Wand. This is the way to start something new and make sure it works. The Magician is making sure that he’s ready to tackle something large, life-changing, and important.

As Above, So Below

With this pose and the tools, the Magician appears ready to perform some great magical act. The ultimate magical act is the unification of the soul with the Divine. The major arcana doesn’t mess around, by the way. Its messages are grand. There really is no better card with which to begin this enterprise.

The featured Tarot deck is some version of the Rider-Waite Tarot which I’ve had for years. The book behind the cards is a volume from the Pritzker edition of the Sefer ha Zohar, a necessary work for students of the Kabbalah.

[…] of this perversion of the natural order, and this block to our own advancement. He parodies the Magician, whose triumphant gesture reminds us of the Hermetic axiom, “That which is below is like […]

[…] of the cards that has always fascinated me and found its way into my awareness is the Magician. Not only is it the first building block in Tarot, but it is also a well of symbolic and initiatic […]

Leave a Reply to Arnemancy : Card of the Week: The Fool Cancel reply