This year has seen a lot of changes for this website. When I launched the Arnemancy Podcast in June, I also gave myself my first reading with Aleister Crowley’s Thoth Tarot deck. I attempt to interpret it in that podcast episode, and it’s worth a listen. However, now that it’s been a few months and I’ve heard some feedback about that reading, it’s time to revisit my interpretation. 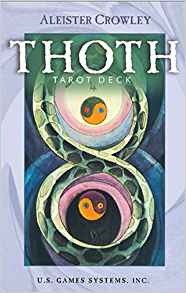 I finally purchased my first Thoth deck earlier this month, so I was able to recreate my first reading. Alexx Bollen guided me through it, which used the 15-card layout from the little white book (LWB) that comes with the Thoth deck. The LWB promises that this spread “offers a simpler layout than the more popular Celtic Cross spread.” I really think that 15 cards is too many for a clear reading. When I read for people, I use nine cards at the most. 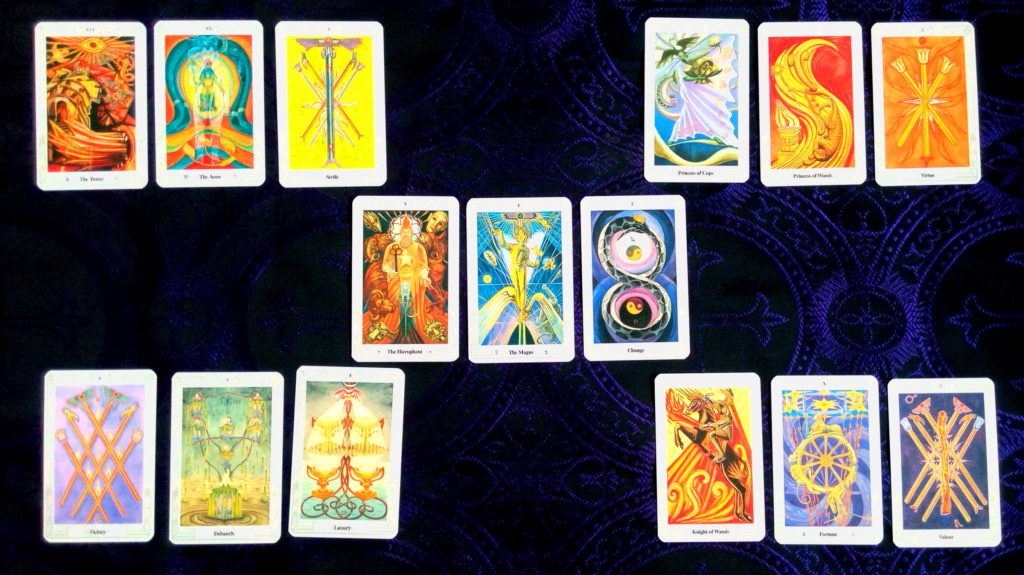 Each of the triads in this reading signify different forces at play, different outcomes, and different aspects of the reading in general. It’s broken up like this:

Let’s take a look at what my reading held! 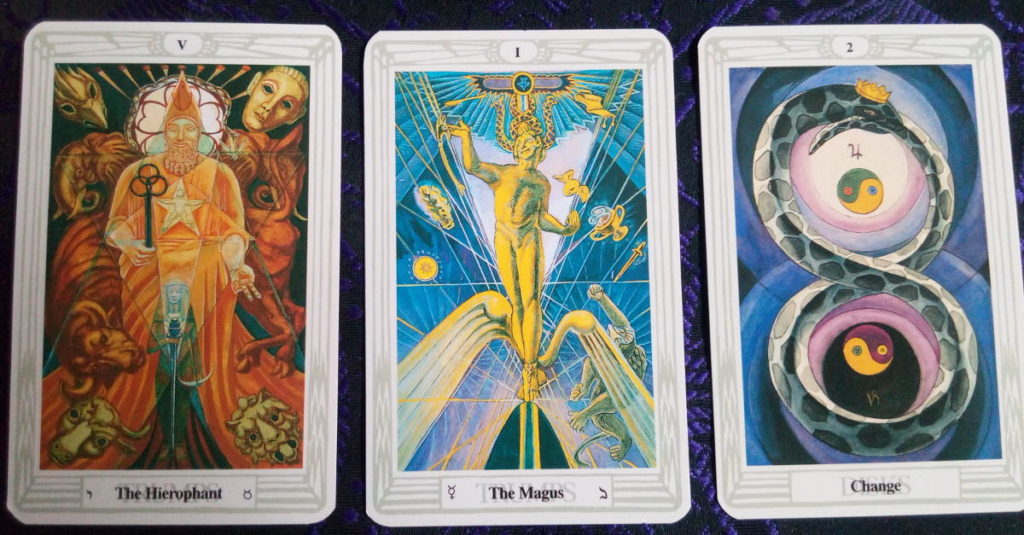 The cards in this entire spread are laid out in a growing spiral pattern order, so when you look at these three cards, they are, from left-to-right, cards 2, 1, and 3.

Card 1, The Magus, repesents the querent and “the primary issue or question.” This might be my favorite card in the whole reading. The Magus is a card of prowess and ability and corresponds to The Magician in the Rider-Waite-Smith (RWS) deck. It’s not only flattering that it’s ended up in spot number one, but it’s an amazing synchronicity. Since we determined that this reading is about the entire Arnemancy rebranding and podcast launch, it is very special that this also ends up being the same as the first card I ever pulled for the Arnemancy website.

Around The Magus, cards 2 and 3 are The Hierophant and the Two of Disks, titled “Change.” These modify the first card and help define the nature of the situation. These also are spot on, and I will defer to the words of T. Susan Chang, who upon listening to the reading said, “That central trio is a completely literal portrait of you! Did you not just literally sew yourself a Magus robe? Do you not literally marry people as part of your job? And as for the 2 of disks… Did you not just literally exchange one podcast for another? Lord of Change, dude, Lord of Change!” 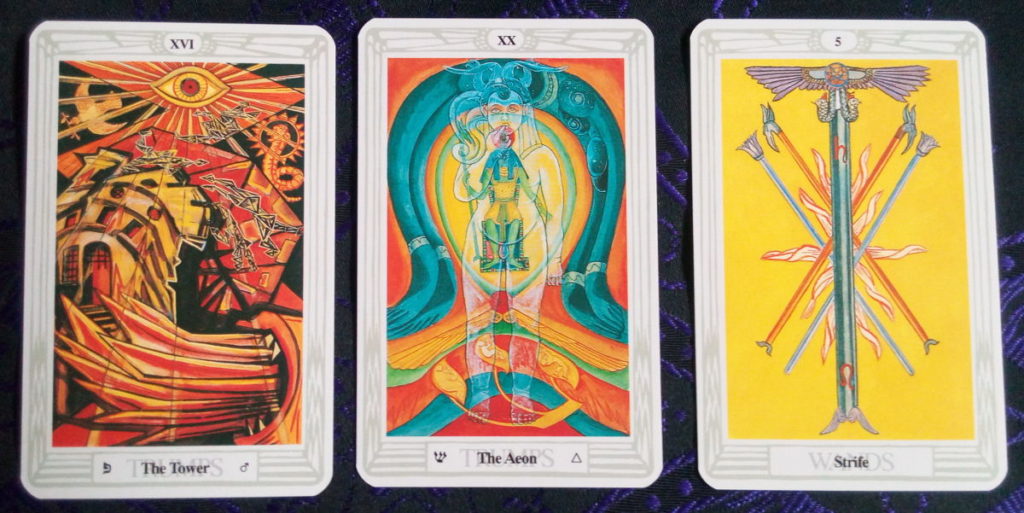 These cards indicate two seperate potential outcomes. They are quite different. On the upper left, we have The Tower, The Aeon, and the Five of Swords (or “Strife”). This is a difficult, tumultuous outcome. The Tower indicates catastrophic change, frequently ruin. The Five of Swords can indicate failure and difficulty. The Aeon corresponds to The World in the RWS deck and can indicate the completion of a cycle, but overall this outcome sounds like crap. On the other side, the Princess of Cups, Princess of Wands, and Three of Wands (or “Virtue”) present a different story. Among the Thoth court cards, Princesses represent elemental earth – just like the RWS Pages. In this case, we have the earthy parts of water (Cups) and fire (Wands). The earth influence symbolizes manifestation in the material realm, which is a really good thing – these are two very positive cards. The Three of Wands is labeled “Virtue,” which is definitely a good outcome. It can also symbolize expansion and greater success.

Among the two upper triads, the upper right is definitely the one I’d like to pursue. But how do I get there? 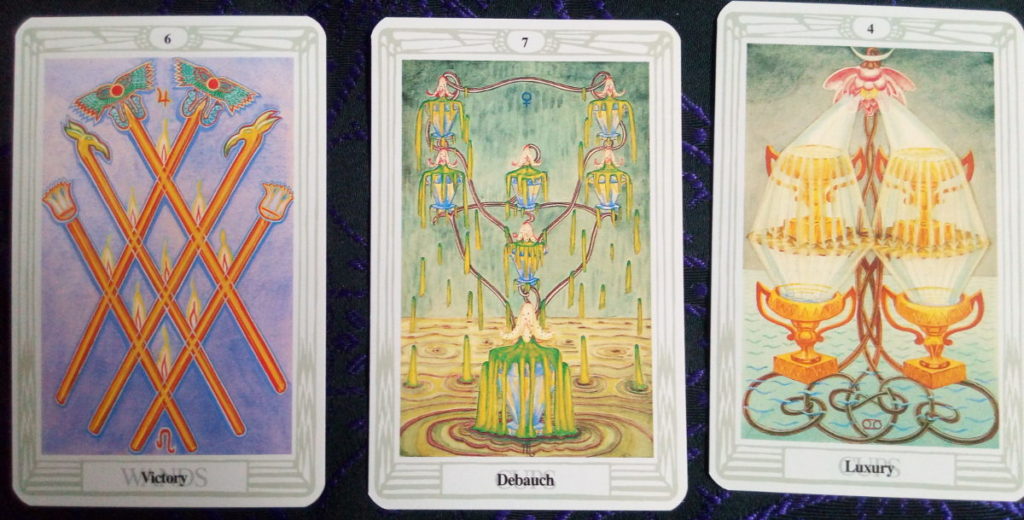 In this triad, we have the Six of Wands, the Seven of Cups, and the Four of Cups – “Victory,” “Debauch,” and “Luxury.” According to the LWB, these cards will “assist the querent in making whatever decision may be necessary.” My instinct is that these work together pretty well. My previous podcast, My Alchemical Bromance, had strong aspects of both debauch and luxury, as it included a lot of beer tasting, interviewing people over beers, and talking about beer. There were even entire episodes where all we did was brew beer together. The key element here, though, is that working on that podcast taught me important skills that allowed it to be a success. There was victory there, represented by the Six of Wands, and that’s what I should carry forward. I am the returning hero of the Six of Wands, ready to move forward with confidence with the things I have learned. 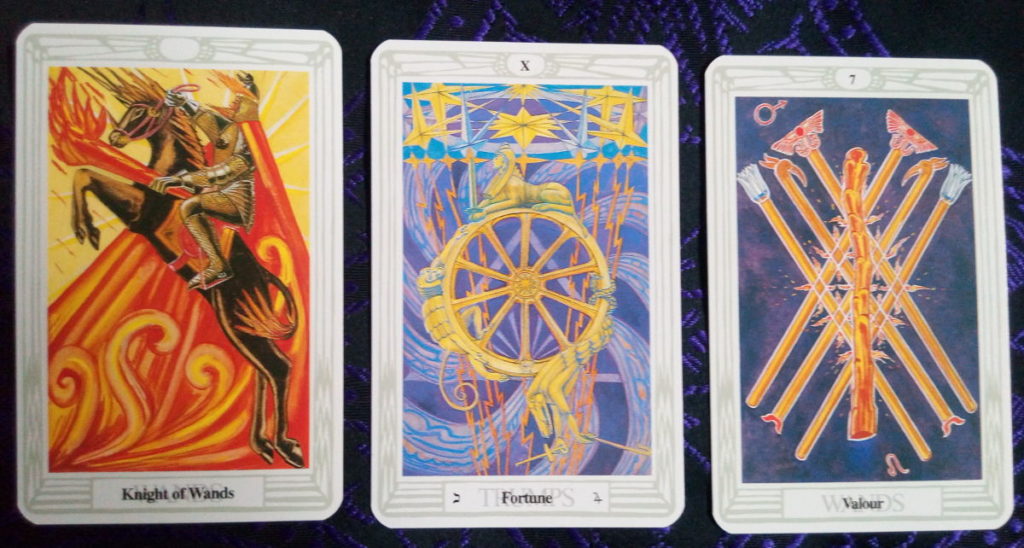 The final triad represents “forces operating beyond the querent’s control.” While these cards can advise me, they can also serve as a warning. Here we have the Knight of Wands, Fortune, and the Seven of Wands (or “Valour”). The Wands are a good warning. They speak of passions and drives that probably exist within me that might be beyond my awareness or control. The Seven in particular could be warning me of a strong ego that could get in my way. More telling is Fortune, corresponding to the Wheel of Fortune in the RWS deck. This card indicates that the ebb and flow of life and destiny will always be out there, and I am not escaping them yet.

Overall, this triad consists of good advise that luckily isn’t stopping me from moving forward.

Overall, this is a powerfully good reading. The central triad indicates that I’m on target, that the reading is definitely picking up on the correct currents. I have two possible outcomes – one bad, and one good. Neither is boring – great! My tools are made clear, and the circumstances of my journey seem accurate.

Everything in this reading indicates that I have work to do, but that I can choose the right path if I pay attention to my passions and my ego. Upon revisiting this reading, I find it to be strong and true, and it gives me hope for the success of my next projects, in particular the Arnemancy Podcast and website.

If you’d like a Tarot reading from me (but not from the Thoth deck, which I’m obviously still learning), click here to book a video reading over Skype!

Wow; I didn’t realize that you never had the Thoth deck before last September!

I actually like this spread a lot, when reading for myself. I usually use a 10 car pyramid spread when reading for others. One interesting thing about this spread: very often the reading can end after the first Triad. Very often it answers the question quite clearly, if succinctly.

That really seems to be the case in this reading!

[I’ve been terrible about maintaining my own blog, but I’m working on it!

Yeah, I kinda avoided most things Crowley, so the Thoth deck never seemed that relevant for me. I still don’t really dig it a whole lot. The artwork is stunning but a lot of the cards are so different than what I’m used to, I may as well be reading with an unknown oracle deck half the time.

Get to work on your blog!! I want to read more of your stuff.