The Lovers is the 7th card in the Major Arcana, so it’s number VI, because we start counting at zero with The Fool. As I frequently point out during tarot readings, every six is about love in the Tarot. Sometimes it’s not so obvious, such as with the Six of Swords, and sometimes it’s too obvious, such as when the name of the card is “The Lovers.” For this breakdown, let’s take a look at the Rider-Waite-Smith version of the card. 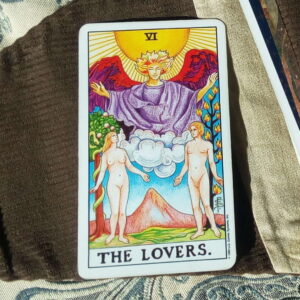 Symbolism in The Lovers

There is a lot going on in this card. Up top, we have the Sun, shining like crazy over the head of a serene flame-haired angel with outspread arms, purple robes, and red wings. Below, in the foreground, we see a naked woman and a naked man. They stand in front of the Tree of the Knowledge of Good and Evil – complete with serpent – and the Tree of Life, respectively. There is space between them, and while the woman stares up at the heavens, the man stares at the woman. It appears that they reach for each other.

The Lovers represent opposites within ourselves: two sides that we must reconcile before progressing to the next stage. Previously we have been addressing individual aspects while treating our Self as one unified thing, but by this card we start to see that this is not the case. We are not just one thing, but many fragments seeking wholeness.

Remeber the Hermetic axiom: “As above, so below.” As Creation is fragmented without, so too is our soul fragmented within. The Lovers is a reminder that part of our Great Work is to identify, join, and unify those fragments, assimilating them and fitting them together like puzzle pieces.

The Lovers can be seen as the union of The Emperor and The Empress, both symbols of authority that rule over different portions of our lives while also providing guidance in different areas. They mark a spot in the Tarot where we stop dealing with oscillating between opposites, and instead have the opposite parts of our nature working in unison.

This is also significant in the number six. Six is the first perfect number, a positive integer equal to the sum of its divisors. In this case, 1 × 2 × 3 = 6, just like 1 + 2 + 3 = 6. Robert Place suggests that this should be seen as the union of the first male and first female principals into a whole.1 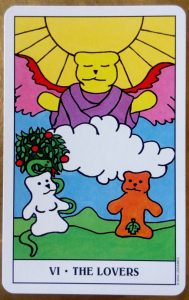 If we look at The Lovers through the lens of Kabbalah, we are looking at the World before the Fall. The two figures are reminiscent of Adam and Eve, but they have not yet consumed the forbidden fruit and so they remain in their natural state, uncovered and unaware of their nudity. When they do eat, the world will enter its fallen state. However, the angel looming over has its eyes closed and stands at orens, appearing to give its blessing. The world needs to fall in order to be united. For the individual to practice the free will needed for the healing to happen, the self must fall further from the Divine.

From a Hermetic point of view, we are looking at the Divine Man and Divine Nature before their union, as described in Hermes’ gnostic vision in the Poimandres.2 In both cases, the unified being – through mystical marriage merged into one – is responsible for descending into a Cosmos in need of repair. The divine influence from the angel shows that this is Divine work – the Fall is divinely inspired. Indeed, both Man and Nature are agents of the Divine, and their work in the Cosmos is essential to the completion of the ongoing process of creation. This mystical marriage of opposites, both within and without, is central to the pursuit of the Great Work. 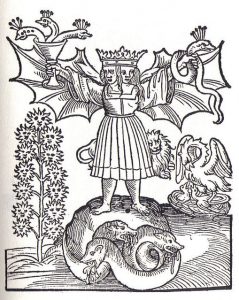 The Lovers can also be approached from an alchemical point of view, and can be associated with the creation of the Rebis, or divine hermaphrodite. This is sometimes said to be the final stage of the Great Work.3 However, I find this interpretation to be troublesome, because The Lovers is so early in the cycle of the Major Arcana. If this card is about the creation of the Rebis, then why is so much turmoil and change ahead?

This step in the Fool’s Journey does represent an important milepost. As you can see in The Chariot, which follows this card, after the fragmented opposites are united, a whole new stage in the journey is next. The Lovers represents the assembly of the final tools needed by The Fool in order to become The Magician and face future challenges.

Click here to book a Tarot reading with me!

[…] source, father, and mother. The Kabbalistic creation story is one of opposites coming together, making love, and producing as offspring the entirety of the cosmos. While the ace as Keter is about the first […]