Beginning a Decan Walk is its own kind of experience. There are so many things you can focus on, so many avenues to explore, and a multitude of approaches. I have chosen to combine a few different approaches. For my own personal exploration of the 36 Zodiacal decans, I am following the rituals put together by my friend Andrew B. Watt, which he is distributing on his Patreon page.

However, I am also giving my Patreon subscribers an inside look into my Decan Walk experience. Since this is my first foray into one of these year-long explorations, it’s not responsible for me to claim that I can lead anybody through it. However, I am a practitioner with many years of experience and I believe it will be helpful to share with my audience and supporters the nature of my experience – successes, failures, and everything else! If you are not yet a Patreon supporter and would like to get the full Decan Walk experience, you can sign up at this link.

Most of what I will share about this experience will be my insight into the connection between the Decans and the 36 Minor Arcana of the Tarot with which they are associated.

This is the first segment of the Decan Walk, Aries I. It covers the first ten degrees of Aries, is ruled by the planet Mars, and is associated with the Two of Wands.

The Two of Wands

Wands are the suit of elemental Fire, and as such they deal with the most abstract, energetic, and creative force in the Tarot. These cards are about imagination, creativity, and beginning. Fire is an active element, and like real fire it can have a destructive side. This card, however, holds pure potential. 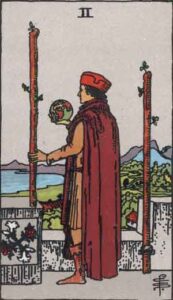 If we look at all of the 36 Minor Arcana associated with the Decans as one story, this is the beginning. In the Two of Wands, the motive force behind pure creation has reflected upon itself and has created a second from nothing. With two, you can generate a third, and all of creation – the entire story of creation – cascades out of it.

In the Waite-Smith card, a man holds a globe in his hand and looks out over a vast landscape. He thinks about expansion and creation. The globe in his hand represents the final form of creation that we will eventually reach at the end of the suit of Pentacles. It is interesting that these cards are far away in terms of Tarot, but only about six months away in terms of the Decan Walk itself. But let’s not jump too far ahead!

While this card doesn’t necessarily indicate action, it is definitely the coiled spring of the Minor Arcana. From here, all potential springs and can either be realized or wasted. I have always seen this character as an ambitious merchant more than a conqueror, and as a merchant he appears ready to take a risk. Ahead of him is opportunity, and he is about to burst forth to carry out his plans. Will he succeed? This card isn’t about that – it is about the power and will to act.

The plans being pondered by the man in the Two of Wands will quickly begin to be realized. There is a rocky road ahead, with both successes and failures, obstacles and triumphs.

If you would like to read more about this Decan, you can find the rest on my Patreon page!

[…] however, and modify the incense to reflect the element of the sign. In this way an incense for Aries I, Mars in a fire sign, would be slightly different from Scorpio I, Mars in a water sign. The […]