The Western esoteric tradition has been steeped in the influences of the seven classical planets perhaps since its very inception. In fact, the planets’ influence stretches beyond the esoteric to pervade everyday life, showing up everywhere from from the archetypes they present to the very names of the days of the weeks. Given the saturation of planetary concepts in our culture and history, the existence of planetary magic should come as no surprise. In this context, planetary magic is any technique that uses the classical planets in a magical or ritual context.
END_OF_DOCUMENT_TOKEN_TO_BE_REPLACED

My last podcast episode with Misha Magdalene was the 32nd episode of the Arnemancy Podcast and also the last episode of season one. I’m taking the summer off to record less and work on some new ideas for season two.
END_OF_DOCUMENT_TOKEN_TO_BE_REPLACED

Sexuality and Gender in Paganism with Misha Magdalene

Author, pagan, and sorcerer Misha Magdelene joins me to talk about the intersection of gender and sexuality with magic and polytheism. Misha is the author of Outside the Charmed Circle: Exploring Gender & Sexuality in Magical Practice and is also the author behind the Patheos blog, Outside the Charmed Circle. We talk about cracking open the ways we are “programmed” to look at the world and how various esoteric practices seem like a perfect place to explore new ways of looking at the world and deconstructing concepts and cultural cues that most of us are never forced to look at very carefully.

Our conversation explores gender and sexuality across a variety of esoteric traditions, including Wicca, modern polytheism, ancient religions, Kabbalah, and more. We discuss the art of writing a book, and Misha’s approach to authoring their book. We also discussed how to get started learning about LGBTQ topics and issues, and how to face the fear that keeps us from confronting components of our own identity that might be deeply significant but not of our own making.

This episode wraps up Season One of the Arnemancy Podcast. Season Two will kick off in September, and in the meantime I will be releasing some bonus material for my Patreon supporters, so head over to the Arnemancy Patreon page and check it out.

Learning the Zohar with Justin Sledge

In this episode, I talk with Dr. Justin Sledge, a professor of philosophy focusing on the intersection of philosophy and esotericism. He studied at the University of Amsterdam’s Center for the Study of Hermetic Philosophy and Related Currents and on top of that, he has a Ph.D. in philosophy. Our discussion focuses on the Zohar and how to study it. The Zohar is a massive text – the Pritzker edition is twelve volumes – and it is a complicated and difficult thing to study.

Dr. Sledge takes us on a journey through the history of Kabbalah and the Zohar’s place in it. Our conversation includes discussion of Abraham Abulafia, Sabbatai Zevi, the Mandaeans, Moses Cordovero, Daniel Matt, and even some John Dee and Johannes Trithemius. It’s a long episode and it is full of stuff!

Thaumaturgy and theurgy are old concepts in the Western mystery tradition, and they find new relevance and importance for today’s magicians, occultists, and practitioners. Though they are sometimes treated as competing ideas or even opposites, their definitions aren’t as cut-and-dried as you might hope. In this article, we will briefly explore these two concepts, where they came from, and how they are treated by today’s practitioners.
END_OF_DOCUMENT_TOKEN_TO_BE_REPLACED

This particular meeting of minds has been a really long time in coming. Greg Stewart joins me for a discussion about postmodernism, Freemasonry, Hermeticism, and the role of sacredness in everyday life. Greg and I have both been Freemasons for a really long time, and we’ve both been active on the Internet talking about Freemasonry, esotericism, and the Western mystery tradition for ages. Amazingly, though our paths may have come close to intersecting, somehow we have never talked before. In this episode, we change that.

Our conversation explores the early connection between Renaissance Hermeticism, Rosicrucianism, and the roots of modern Freemasonry. We discuss religious threads in Freemasonry and how the Masonic approach can help us be accepting of other faiths, beliefs, and approaches to life. We follow every tangent we can get our hands on, too. Expect a wide array of related topics in this lively conversation!

I’m on the Alexxcast again! Alexx and I talk about productivity, emergency champagne, staying creative during the pandemic, and then we listen to some surprising voicemail. Here’s his description of the episode:

Go listen over on The Alexxcast page, or listen here!

A Tarot Reading with Aaron Epperson

Back in the good old days of My Alchemical Bromance, we had our good friend Aaron Epperson on for a reverse interview. It was a delightful experience pretty early in my days as a podcaster. Now that I am a seasoned, salty veteran of the podcasting world, Aaron has returned to lift our spirits with another extra special appearance. Please join me, Reverend Erik, as I give Aaron his first ever Tarot reading, live on this episode!

For this reading, I used the Miniature Rider-Waite Tarot Deck from U.S. Games. I linked to the exact deck I use – it looks like there are some low-quality knock-offs of the miniature deck available, but mine is pretty nice. Since I had all of my podcasting equipment on the table, I had to use the tiny cards or there wouldn’t have been any room! 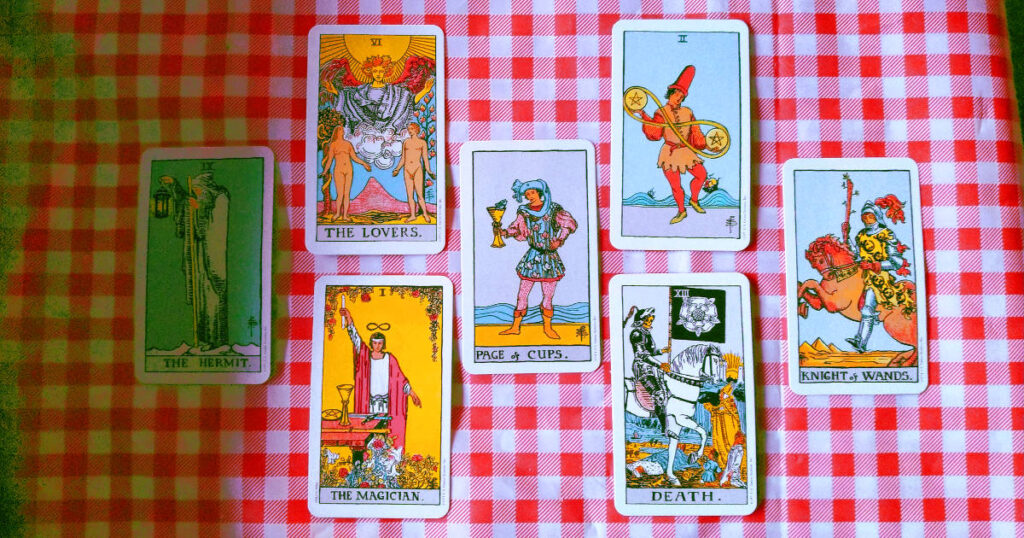 Please excuse the color correction on this photo. The Hermit was in a shadow and being the masterful photo toucher-upper that I am, I did what I could to make that card more visible.

Ted Hand is public school teacher and independent scholar of Renaissance Magic. In this episode, he discusses the Hypnerotomachia Poliphili and Atalanta Fugiens as influential Renaissance texts and the culture of images. Ted discusses in particular the concept of using these image-heavy texts as vehicles for esoteric or mystical play. He discusses in particular the Atalanta Fugiens as a multimedia text and the Hypnerotomachia Poliphili as almost an architectural handbook.

This conversation ends up being a deep exploration of the historical culture of the imagination. We discuss alchemy, the Rosicrucians, early Freemasonry, Robert Fludd, Giulio Camillo, image magic, forbidden knowledge, the Art of Memory, and building a relationship with meaningful texts.

One key bit in this episode is Ted’s explanation of why well-known Renaissance man and architect Leon Battisti Aberti was considered as a potential author of the Hypnerotomachia before scholars seemed to settle on Francisco Colonna.

Along the way, Ted and I discuss different definitions and approaches to meditation in the history of Western esotericism, and we talk about the role of imagination and visions in meditative practice. This in particular might be one of the greatest lesson

This episode is the second in a series on the Hypnerotomachia Poliphili and serves to help introduce the audience to the thinking, culture, and scholarship around this remarkable book and its lasting effect on our culture. Check below for show notes and for Ted’s recommended reading list.

The work of a magician is imaginal, taking place in a realm of phantasy and imagination. The Astral Temple is one of the core works of the magician. It is akin to a spiritual home base, a palace of memory, and an ever-present ritual space enabling the practitioner to perform ritual without physical tools and implements. The method of constructing and building an Astral Temple is powerful and something that every magician should begin developing early in their practice. This is a space created entirely in the imagination. From a magical perspective, it can be seen as existing in the realm of Yetzirah, the Kabbalistic world of formation.
END_OF_DOCUMENT_TOKEN_TO_BE_REPLACED

We use cookies to ensure that we give you the best experience on our website. If you continue to use this site we will assume that you are happy with it. Privacy policyOk