Exploring West Marin County, California, one might observe the imprint of a particular artist without ever knowing the name “Ernesto Sanchez.” The seaside village of Bolinas is home to his outdoor piece “Emergence of Spirit” (sometimes called “The Lady of Bolinas” shrine), a nonspecific goddess not representative of any particular belief system, yet still fondly adorned with the prayers and flowers of admirers. In the town of Point Reyes Station, in front of the West Marin Pharmacy, one will find that the phone booth has been converted into a shrine, another Sanchez creation, with a mirror-mosaic encircling twin serpents and a singular eye. A short walk to the opposite end of town one will find the artist’s studio, with a window and yard open to the public, showcasing the art of Ernesto Sanchez. 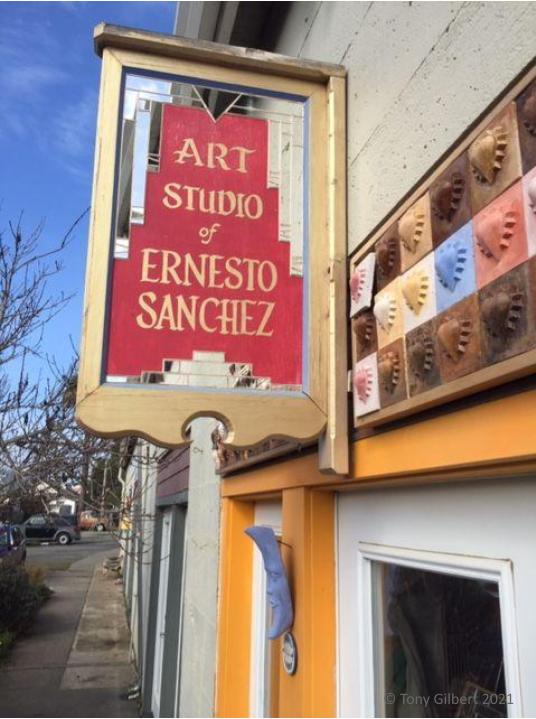 There, I first met Ernesto Sanchez, working yet welcoming to this lookie-loo. I was awestruck to discover a whimsical display of shimmering shrines, custom-made altars (or “spirit houses,” as he prefers to say), smiling moon faces, contemplative masks, towering angels, and several examples of the silent and watchful Eye of Providence.

“My art is not for everyone,” Sanchez points out. Clay heads are spiked with nails, ceramic faces are missing one eye, and free-floating, life-like eyeballs are embedded in plaster.

What strikes me overall about Sanchez’s art is that, like his Emergence of Spirit shrine, his transmorphic figures appear purposefully vague, non-denominational, and open to interpretation. Clearly there is a spiritual element to Sanchez’s work, yet the artist seems unconcerned with pushing any particular dogma. Rather, his art is ready to be imprinted with the spirit and viewpoint of the viewer. For example, a feminine statue need not be the Virgin of Guadalupe, a cross is not inherently Christian, and an angel might be the spiritual protector from any one of many interchangeable faiths.

The meaning of each symbol, if there is any, will change from person to person. So, if a specific “goddess” is seen in a particular piece, that spirit might only be visible to the individual, vivified by the deeply personal perceptions and beliefs of the beholder.

Perhaps this is the ideal spiritual art for “Nones,” the unaffiliated, solo practitioners, and the “spiritual but not religious.” This art depicts deconstructed symbols, minimalist icons for the fluid faith described by William James, or an object to focus belief when it is the belief itself that matters more than the system of belief, as suggested by Austin Osman Spare and Peter Carroll.

In self-directed spirituality, one makes their own meaning, or, as Walter Leslie Wilmshurst put it, “Thy seeking is the cause of thy finding.” Søren Kierkegaard suggested, “what matters is to find a purpose… to find a truth which is truth for me.”

“The art is a portal for people’s own sense of self-discovery,” says Sanchez. He describes his work as “spiritually infused, mystically influenced, heart-based art.” And if Sanchez is the shaman on the path of self-discovery, then this echoes the words of Joséphin Péladan, who said, “Artist, you are a priest.” 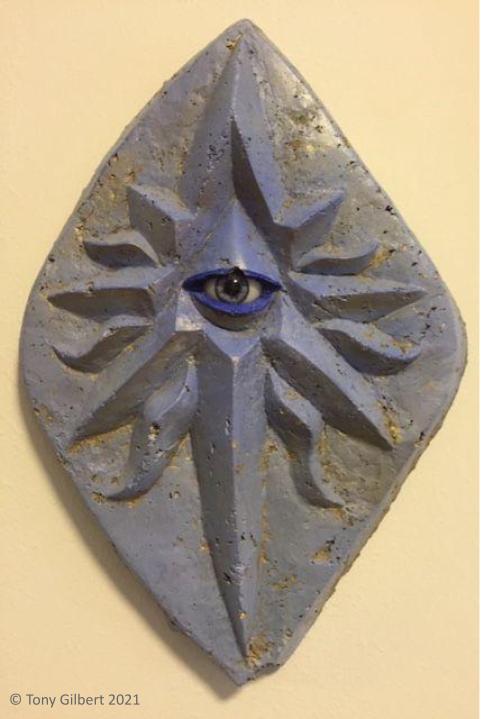 But what about those eyes?

Eyes are prominent in the art of Ernesto Sanchez: free-standing, realistic eyes; and faces missing one eye. Sanchez emphasizes that the eye is imbued with spiritual symbolism. Indeed the eye has inspired notions of the Eye of Providence, the Third Eye, and the old saying “the eyes are the window to the soul.” The Hebrew letter Ayin (ע) literally means eye, with Kabbalistic implications of a “pre-Creation Creator.” Wilmshurst wrote, “So small a thing as the eye can behold the expanse of the heavens and the finite mind can contemplate infinitude.”

However, to Ernesto Sanchez, the eye also has a personal meaning. As an adult, Sanchez lost vision in one eye. His artistic vision was influenced by partial blindness, and perhaps his art helped him to heal. “I found that some believe that the loss of sight can lead to enhanced creativity,” states Sanchez. “Blindness or missing eyes are symbolic of the potential transformation of one form of consciousness—one form of seeing—into another, broader one.”

Transformation is often the goal of art. Ernesto Sanchez says that he “births” each new art piece, and describes the artistic process as “alchemy.” Perhaps it is alchemy when blank white canvas is painted a bold color, formless clay is sculpted, or mundane material is transformed into a sacred symbol. Each item is morphed into something new entirely, enhanced. And it is hoped that the viewer and artist are also changed, metamorphosed into something different than before. 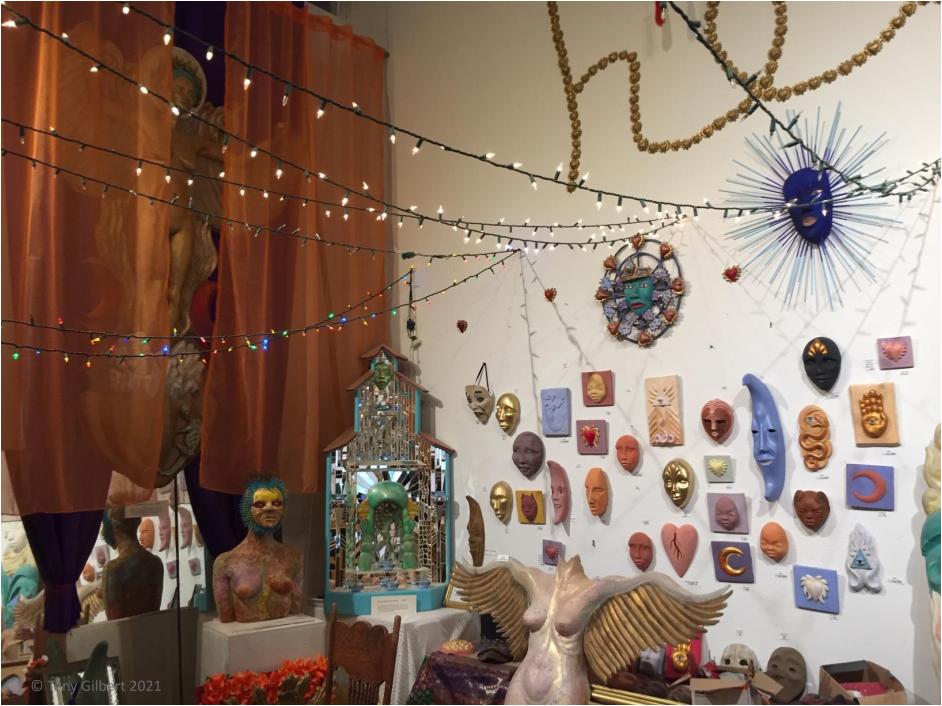 Inside the artist’s studio.

Tony Gilbert is a freelance writer in San Francisco, California. He is searching for a publisher for his manuscript novel titled, “The Egregore,” about icons and botanicas in San Francisco’s Mission District. See the book’s preview at the link here: https://egregore.art/