“Ritual magic is a combination of performance art, prayer, and meditation.” – Dan Attrell

When a person gets involved in ritual magic, they probably aren’t prepared for the amount of crafting supplies they’ll need to accrue and artwork they’ll need to produce. Wands, altars, and magical tools and weapons all need to be created, typically by hand. This can mean picking up skills like woodworking, sewing, painting, and drawing. As magical work becomes more complex, even metalworking and jewelry-making skills can be necessary.


Since ritual magic traditions tend to be pretty old, the materials used in rituals can be difficult to identify or acquire. For example, galbanum is an aromatic resin that is a chief ingredient in several important incense recipes, including the sacred incense from the Torah.1 A current frustrating project of mine is creation of myrrh ink from the Greek Magical Papyri. The recipe is outlined in PGM I. 232-47 and includes the following ingredients:

Creating ink is a challenge in itself – one that I still haven’t mastered, though I think I’m getting close. On top of that is the challenge of gathering those ingredients – how do I get the wings of a Hermaic ibis?3 Are substitutions okay? Should myrrh ink be created with local ingredients, or am I expected to source authentic northern Egyptian pinecones?

In a lot of cases, the modern ceremonial magician needs to get creative when crafting new ritual. Here are a few substitutions and tricks that I’ve picked up that have worked for me.

A lot of ritual magic concerns the creation of talismans and amulets. These two techniques are similar. Amulets tend to be general purpose and frequently are not consecrated with a special ceremony, while talismans are specifically crafted and consecrated in an attempt to tie them to some specific influence or energy. Talismans can be found in pretty much every magical tradition human culture has ever produced.4 The tradition that I work with uses a lot of planetary and astrological talismans, with different planets associated with different metals. For example, Jupiter is associated with tin, the Moon with silver, and the Sun with gold.

Working with precious metals is complicated and can get very expensive. Many magicians find alternate materials to work with. A great example is the Venus talisman in this video by Niish, which was consecrated using a ritual inspired by the Picatrix.

Niish’s talisman is primarily made of fabric and probably some other secret Venus-associated ingredients. There could be copper, Venus’s metal, involved somewhere, but it is not the primary ingredient.

My medium of choice for talismans and amulets is polymer clay, which can be baked in the oven. (Thanks to Carol Maltby for correcting this.) This is an entirely modern ingredient, marketed as Sculpey and available in a wide range of colors. Since it cures at a relatively low temperature, it can be used with jemstones and mica powders to excellent effect.

Some talismans and amulets call for parchment or paper. Parchment is prepared animal skin, usually from a goat or sheep, and is both expensive and difficult to source. It is a medium that is no longer common enough to be easily found. Paper, on the other hand, is too easily found, and frequently feels to me to be too common to make an effective base for magical work. Instead, I like to use papyrus, which you can find for a reasonable price online. Papyrus has an unusual feel and is fun to use. It takes ink well and I’ve had excellent results from it. 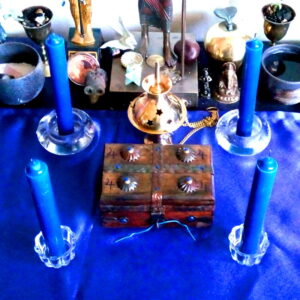 My altar prepared for a Jupiter working, featuring altar cloths that I sewed myself.

My mother taught me how to sew by hand when I was a child, and when I picked it up again as an adult, it wasn’t because I wanted to use textile art for magic. However, most of the items I’ve sewed have ended up being things like bags for amulets or Tarot cards, altar cloths, or talismanic satchels.

The basics of sewing are pretty easy, and small items can be sewed quickly by hand. You can even use techniques like a blanket stitch to seal two-sided paper talismans. The Reader’s Digest New Complete Guide to Sewing is a great book to get started with this craft. Trust me, once you sew your first altar cloth and get to use your handiwork daily, there’s no going back.

There are so many incredible crafting tools available to us today that our grimoire-writing predecessors never dreamed of. 3D printing gets used by many talisman and amulet-makers these days. I don’t own a 3D printer, but I have a couple of 3Doodler 3D pens that I use for magical crafting. These things are so much fun. I have used them to create simple holders for lamens and talismans, as well as for a Tarot card stand that I use for meditation.

Learning basic electronics can also help you with magical tools. You can add simple colored LEDs to talismans or use them to light your altar. Flickering LED candles make a safe alternative to open flames, and can also be used with far less hassle in outdoor rituals. I use flickering LEDs to add ambience when working with a crystal ball or other scrying method, as well as to liven up my props for public Tarot readings.

You can also check out my planetary smart altar for a cool special effect I’ve added to my work. It’s gesture controlled, which helps me feel like a real magician. Special effects like this were common in both temple and magical work in the ancient world, and were viewed as their own type of magic. Remember the magical statues spoken of in Asclepius.

“Are you speaking of statues, O Trismegistus?”

“Yes, statues, Asclepius. […] These statues are made alive by consciousness, and they are filled with breath. They do mighty deeds. […] They give sadness and happiness according to merit.”

Have Fun with Arts and Crafts!

For me, ritual magic is fun as well as meaningful. I enjoy the aspect of crafting my own tools, talismans, and accouterments. You should do the same. Learn a new craft, pick up some new materials, go forth, and create your own ritual magic environment with elements created and crafted by you. This will help you learn new skills as well as add new meaning to your practice.

I was really happy to see that the StarStruck podcast addressed this in episode 3! Check it out here: https://www.podbean.com/media/share/pb-gy4aa-998e1a

Thank you for the inclusion of the time-arts piece in which you were instrumental!
As ever, I am honored to call you a friend and Frater.

[…] the modern world, it must adopt the rainments of the modern world. I’ve written before about how I use modern materials in my craft. I’ve used polymer clay for talismans and replaced tin foil with aluminum. We can see that […]

Sculpey is a polymer clay, not plasticine. Plasticine is an oil-based “clay” that does not dry out when exposed to air, and thus is not meant to be baked to fix its shape, unlike the polymer clays.

Ooooh, thank you!! I will update the article with that info.

[…] A last minute change in the line-up brought in artist, author, and naturalist Lupa of The Green Wolf to teach a class on skull scrying. This class was a trip. Lupa led us through an understanding of using animal remains as sacred objects, approaching them respectfully, and then gazing through the foramen magnum into the cranial cavity, using the darkness as a scrying surface. […]

[…] strikes me overall about Sanchez’s art is that, like his Emergence of Spirit shrine, his transmorphic figures appear purposefully vague, […]