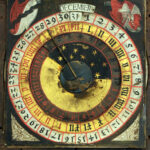 On the very eve of the New Year, I am joined by my two amazing friends, astrologer Andrew B. Watt and cartomancer T. Susan Chang, for part two of our 2022 Forecast! Join us as we put our divinatory skills to the test. As Andrew interprets astrological charts for each month, Susie draws Tarot cards, and I am there to moderate!

Part two of the 2022 Forecast covers the months of July through December.

Two special notes for this episode:

T. Susan Chang bought her first tarot deck at a Barnes & Noble in New York, where she moonlighted as a reader while working in academic publishing. After leaving the city, she took her practice underground for many years, re-surfacing in 2015 and taking up the systematic study of esoteric correspondences in tarot.

Her interest in tarot is wide-ranging and passionate, and has included:

When not engaged in tarot-adjacent activity, she teaches writing at Smith College, and writes occasionally about food and cookbooks. She lives in western New England with her husband, two children, and a variable number of chickens.

Andrew Watt is an astrologer, poet and artist living in western Massachusetts. He works in textiles, wood and words to produce objects for practical magic and mysterious practicality, and seeks the honest wisdom found in the life of an artisan.