You’ve probably had the same experience I’ve had: no matter how well you begin to understand most of the cards in your Tarot deck, there are still one or two stubborn holdouts, mysteries that make your brain blank when you get them in a spread or as your daily card. In 2018 I got the Queen of Wands once every two days for over a week and I had no idea what was going on. I’m still not sure what was going on! This post demonstrates an exercise you can use on stubborn cards, though of course you can eventually do it to every single card if you wish. The exercise comes out of pre-writing practice and it’s called “webbing” or “mind mapping.” It’s an excellent way to explore the visual and esoteric symbols of any card.

First let’s talk about webbing. You may have done it before in school, especially in a writing class—it’s simple and a lot of students hate it. You start by taking whatever your topic is and put it in the center of a sheet of paper. Then you just surround it with related concepts and link them up, forming a web of associations as you go. There’s good reason to get comfortable with this method. It’s useful a lot of the time. It can demonstrate what you don’t know, or that you know more than you think. It can show the relationships between different ideas, even when you thought there weren’t any. Everything is linked back to the starting point of course, but links can form on the edges of the web as well.

It’s really simpler to look at an example than to read increasingly complex descriptions of it. I mentioned above that I have difficulty with the Queen of Wands so I retrieved her for this exercise. 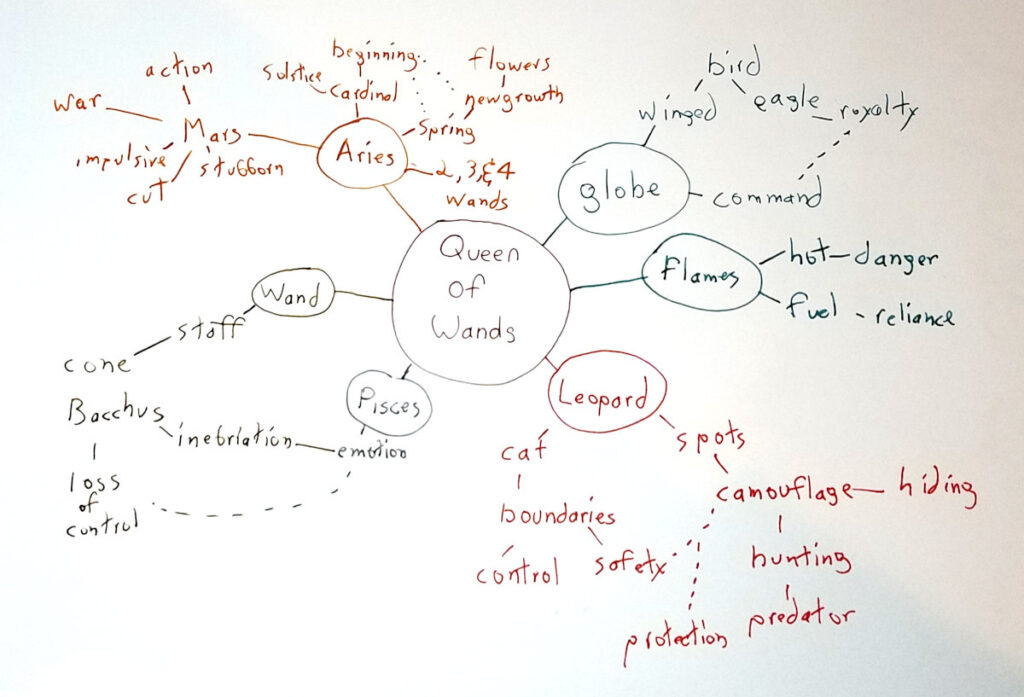 Now that it’s visible, I’ll outline a few strands of the web. The first I did was leopard. It splits immediately: leopard → cat and leopard → spots. One goes leopard → cat → boundaries → control / safety and the other goes leopard → spots → camouflage and it splits again into camouflage → protection, camouflage → hiding → trickery, and camouflage → hunting → predator → prey. I think these chains of meaning produce some useful ideas. The Queen of Wands is powerful and aggressive to some degree, since she’s a fire card, but there’s a useful placidity, a calmness waiting, that contrasts to the King/Knight of Wands, who goes for it and either succeeds or fails.1

You can also see that I dove into the ideas Crowley expresses about the Queen. I had no idea, despite having read his book before, what the heck was on top of the Queen’s staff, so I looked it up. A cone, like a pinecone, which Crowley says relates to Bacchus. So I toss that into the web (it doesn’t have to all be things you come up with off the top of your head), and then go further: Bacchus → inebriation and Bacchus → loss of control. You can see I connected that to Pisces because that astrological sign is often associated with emotions, particularly emotional overflow.

This technique doesn’t just help you come up with a handful of ideas you didn’t know you already knew, or even just position information in relation to other information – though it does both of those things. It also forges connections between ideas, reinforcing them in your mind and helping you to both understand and remember the ideas. That’s the key, the best reason for doing this webbing stuff. 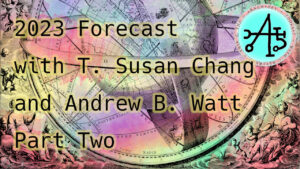 If you think of an idea as a concrete thing for a second, just for the purpose of this exercise, then you’ve got big, heavy ideas that take up a lot of space and small, light ideas that are hard to find when you go looking. The more you add to an idea, that stronger it becomes. The more and more strands of web, the more layers on the single idea. So even if I don’t remember Queen of Wands → Pisces → emotion → loss of control → Baccus → cone → staff → wand → Queen of Wands every time I pull this card, the idea of loss of control has in some way been layered onto the Queen of Wands idea in my mind. Every time I add a node to the web I am strengthening the core idea in my mind. To use a different, simpler metaphor, every additional connection makes a difficult or hard to understand idea a little stickier, a little more likely to catch and be useful to you.

So, webbing is a simple enough technique. If nothing else, you will get a visual representation of what you know about your card. But that will, in turn, increase the knowledge itself, both in its presence in your mind and in the neurological links between different ideas in the network of your mind. And, finally, if you’re interested, grab a sheet of paper and do it! Embodying it with actual action helps to encode the information much more easily and actively. And it’s fun, which also helps! Get some colored pencils or something!

The author, G. Conley, can be found in the following places: Patreon, WordPress, and Twitter.

[…] also note this method is basically identical to the pragmatic post I wrote for Arnemancy.com about webbing. The bird means many things. Birds, on their own, mean things like freedom, grace, height. White […]

[…] post builds on this post I wrote for Arnemancy.com about webbing. Given that, the whole post won’t be about doing the webs, but about the ways we can link cards […]

[…] come up together when we think of things. Think of the webs, which I’ve written about both on Arnemancy.com and […]

[…] courts are notoriously difficult for many people, and I found them so myself for a good long while. You could always build a web for your deck too, of course. But this gets you into the way the entire court works together (or […]

[…] You can read the post I wrote for Arnemancy about using word clouds for tarot over here. […]