Recently, I upgraded my altar into a planetary smart altar. With a gesture, the altar lights up in colors displaying the current planetary day and hour. 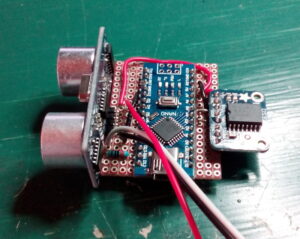 The smart altar is powered by an Arduino Nano, using a real-time clock (RTC), a string of NeoPixels, and my PlanetaryHours Arduino library. I used the planetary colors and calculation method from The Key of Solomon, a well-known medieval grimoire.

Gesture control is done via an HC-SR04 ultra-sonic range finder. It is pretty simple for now, but I can see using such a range finder to detect more complex gestures in the future.

In this short and poorly produced video, the smart altar displays the hour of Mars on the day of Mars, which is basically the planetary hour after sunrise on a Tuesday.

I like the idea of using modern technology alongside techniques from grimoires. As you may have heard on My Alchemical Bromance, I’ve been studying and working with grimoires more often lately, but I yearn for ways to update them for modern times.

For instance, I know of several practitioners who use electric candles instead of the real thing. In fact, I have assembled quick electric candles using LEDs and an Arduino for various work. It’s far safer than the real thing, and if you’re not staring directly at the lights you can’t even tell. I also use a binaural beat program for my phone to aid in morning meditation. Modern technology is great for ritual work!

What modern technology have you incorporated into your practice? What else do you think a smart altar should be able to do?

[…] can also check out my planetary smart altar for a cool special effect I’ve added to my work. It’s gesture controlled, which helps […]

Thanks! I love it and use it all the time.

I also use binaural beats for meditation, especially for when I want my mind to wander or I’m trying to figure something out. Another great tool to experiment with is Robert Monroe’s Hemi Sync course work – it’s pricey but you can find a few of his recordings on YouTube and then if your google-fu is strong enough, you are likely to find a download link out there.
Can’t recommend enough.

Nice! 🙂 I’m amazed at the library you are using to calculate sun rise/set. I’m working on a raspberry pi kiosk to display this information along with moon phase, current chart etc and that was the toughest part with sweph. Going to hack together a arduino project now you have given me so many good ideas! 🙂