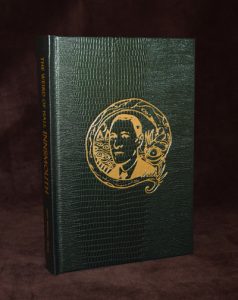 The Weird of Hali: Innsmouth is the first in John Michael Greer’s series of Lovecraftian novels. Greer is a prolific author and accomplished member of several pagan, occult, and fraternal communities, most recently founding The Druidical Order of the Golden Dawn. He has published on many topics, including the occult, peak oil, and Druidism. He is also the writer of the long-running blog, The Archdruid Report. Before I get into my review of his latest novel, I should disclose that I know John Michael and that we were neighbors for a couple of years in Southern Oregon.

The novel follows the adventures of Owen Merrill, a history student at Miskatonic University, whose exploration of the life of Howard Phillip Lovecraft bring him into contact with the strange new science of Noology while plunging him into a world of exciting and bizarre supernatural adventure. The narrative is structured like a classic fantastical adventure story. Owen is an active participant in his adventure and a likable character. I found myself empathizing with his plight and cheering him on.

Greer is a skilled author, and his skill shows in many ways. One that I found particularly surprising was his control of mood and pacing. The book starts off slow, with too much detail paid to the most minute detail. He enumerates every step of Owen’s day, every meal eaten, every boring class. The reader becomes dulled by the mundanity of the story. However, when the secret world of the novel is revealed and events really start to take shape, the pace and style of the book shift accordingly, and suddenly the reader is swept along in a riveting adventure.

I do not want to reveal too much of the novel’s plot in this review. As suggested by the title, subject matter, and publisher’s blurb, the story involves the Cthulhu Mythos and Lovecraftian themes. However, Greer’s approach to them is not only novel, but transformative. His vision of the Great Old Ones and their servants is new and fresh. In fact, the change to the Lovecraftian paradigm is so enjoyable and unexpected that I really look forward to further books in the series.

This book is a handsome volume. It is a tightly-bound octavo with a glossy green faux-snakeskin cover with gold embossing. It features custom-designed endpapers with strange Lovecraftian horrors, and is both well-designed and well-presented. It is a sturdy book, and an absolute pleasure to read. Only 500 signed hardcover copies are being issued. However, the publisher hinted to me that a forthcoming paperback edition can be expected. This book deserves a broad audience, so I look forward to seeing that happen.

The Weird of Hali: Innsmouth deserves a place on the bookshelf of every fan of Lovecraftian horror. Greer’s fresh take on a century-old genre brings a much-needed life and excitement to the overused world of “nameless terrors” and “cthonic architecture.” I enjoyed this book and recommend it heartily.

The Arcane Wisdom edition of The Weird of Hali: Innsmouth is no longer available, but you can find a new edition at Amazon.com here!