Among the twos, the Two of Cups is my favorite. My preference for this card probably comes from its amazing depiction in the Rider-Waite-Smith Tarot, which portrays a man and a woman staring into each other’s eyes. Meanwhile, a freakin’ massive winged lion head atop a caduceus seemingly sprouts from their clinking cups. This card has a certain ease to its appeal. You can look at it quickly and just think, “Oh, there are two people.” It’s after a few moments that the eyes boggle and the mind begins to rebel at the crazy combination of symbolism exploding out of this card. 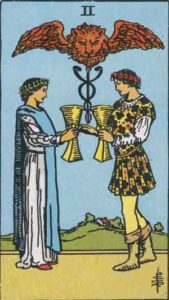 What the heck is going on in the Two of Cups?

The Kabbalah of the Minor Arcana

The pips of the Minor Arcana map onto the sefirot of the Tree of Life. Aces are Keter, twos are Chokhmah, and so on down to the tens being Malkhut. This means that the Minor Arcana can be looked at as a path for divine things to become more and more manifest. In each suit, while the ace is a card of unrefined potential, the two is where an idea starts to come together.

The relationship between the ace, two, and three reflects the supernal triad of Keter, Chokhmah, and Binah – the creative source, father, and mother. The Kabbalistic creation story is one of opposites coming together, making love, and producing as offspring the entirety of the cosmos. While the ace as Keter is about the first moment of attraction, the Two of Cups is the act of intercourse, and the Three of Cups would be birth.

Across the suits, we find an interesting relationship that’s likewise filled with a tale of increasing manifestation and physicality. The active, destructive-yet-constructive Wands represent a male principle, while the receptive Cups represent a female principle. When they interact, they are the generative force that brings forth the more worldly suits of Swords and Pentacles.

This Kabbalistic background hopefully demonstrates that it is difficult to understand the Two of Cups on its own. This is a complex card whose meaning is heavily informed by the cards around it – and not just its own Ace and Three, but their progenitors in the Wands suit as well.

Cups govern the emotional world, the emotional level of the soul, and the Two of Cups is about growing emotion, emotion that is building and ready to spring into action. The promise of great potential is there. Out of the clink of two cups touching comes every partnership, every empire, every collaboration.

The Mystery of the Red Lion

A youth and a maiden are pledging one another, and above their cups rises the Caduceus of Hermes, between the great wings of which there appears a lion’s head. It is a variant of a sign which is found in a few old examples of this card. Some curious emblematical meanings are attached to it, but they do not concern us in this place.1

The most remarkable symbolism in the Rider-Waite-Smith depiction of the Two of Cups is the alchemical menagerie sprouting from the central subject matter. A lion’s head is affixed to a winged caduceus. These are old and mysterious symbols. The caduceus is the staff carried by the Greek deity Hermes, as well as many of his later incarnations such as Hermes Trismegistus. It is frequently depicted topped with wings. Through the Emerald Tablet and other ancient texts, Hermes Trismegistus is the legendary father of alchemy, which sent me down the rabbit hole of interpreting the lion’s head. 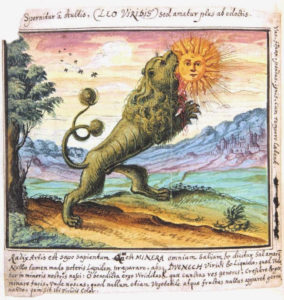 My version of the Rider-Waite-Smith Two of Cups has a red lion’s head, so I went looking for red lions in alchemy. Now, the lion is a very common alchemical symbol, and the motif of the green lion swallowing the Sun is probably one of the more well-known symbols. The green lion itself is a symbol of some type of vitriol, usually sulpheric acid. However, when it devours the Sun, it’s a symbol of aqua regia, a mixture of nitric and hydrochloric acid that is capable of dissolving gold. This might seem obvious when you recall that the Sun is a symbol for gold.2

What avayleth a Lyon to be Kyng of Bestes
Fast schut in a Tower of ston alone;
Or an Egell under stryte cheynys,
Called also the Kyng of Fowlys everichon,
Fy on Lordschyp than Liberte ys gon:
Answer herto and hit nat a start,
Who syngeth mere that syngeth not with hert.3

I scoured the entire Theatrum Chemicum Britannicum for references to the red lion – okay, it was more of a heavy skimming. I found no references to a red lion, but plenty to green lions, lions in general, and even the color red. At this point, I began to suspect that the color of the lion wasn’t important – it’s the lion itself, symbolizing the Sun, and sprouting wings like a gryphon. In this case, the lion could symbolize the spiritualization of an alchemical process.4 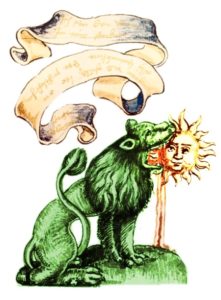 One of my Patreon supporters, John Geraghty, brought my attention to the 16th century alchemical text Splendor Solis by Solomon Trimosin. This book contains a process called “The Red Lion” which is used to create the Philosopher’s Stone. Waite certainly knew about this book, but it doesn’t seem like he connected the Splendor Solis to his Two of Cups specifically. As he wrote, “The plates of Splendor Solis seem purely and typically alchemical, in the physical sense.”5 Even if the red lion in the card is not the same as the red lion referenced by Splendor Solis, looking at it as symbolic of the Philosopher’s Stone can work well with the spiritualization concept.

Looked at from this perspective, the caduceus and lion’s head sprouting from the meeting cups meshes well with the Kabbalistic interpretation of nourishing something greater. The Two of Cups is the beginning of growth and expansion in the emotional realm of the soul, pregnant with possibility, ready to burst forth into something wonderful and new.

Oh, and as bonus, check out John Geraghty with his copy of Theatrum Chemicum Britannicum on Pawn Stars!

My own description of this is very different. The 2 snakes represent ancient wisdom ( meeting of two minds ). The lion is the Lamassu Deity from Ancient Messipitonia, representing a rite of passage and protection. The Lamassu Deityis also know as The Bull head and also represnts The Lion.

Thank you for taking the time to compile this article. I believe the staff of Hermes refers to tantric practices – in this instance, when a man and his beloved engage in a higher form of intercourse, the kundalini is awakened within both of the individuals; the snakes wrapping around the spine/staff presents a clear representation of this. The snakes are said to meet at the third-eye, which also happens when awakening the kundalini, solo – without making love with another. There is a difference between the two, for when one awakens the kundalini, alone, the energy rises from the base and straight-up the shushumna nadi, so the fact that the snakes are winding their way to the Ajna chakra supports the notion of this card referring to a higher form of love-making (alchemical in the most spiritual sense).