I really like Tarot. I have a few decks, but not as many as a collector. A deck catches my attention when it has an interesting approach to classic early 20th century esoteric Tarot themes, so when Taylor Bell showed me his new Sigil Arcanum Tarot, I was intrigued. This is not a typical Tarot deck – there aren’t even any people in it. Instead, it has a plain black background with vibrantly colored, abstract line art. You can tell right away that that the designs are inspired by the Tarot. They are mesmerizing.


Check out my interview with Taylor Bell on My Alchemical Bromance!

The Minor Arcana of the Sigil Arcanum are presented as pips, but they are pips with secrets. In addition, instead of the traditional suits of Coins, Cups, Swords, and Staves, the pips are categorized into elements. The astrological symbols that are associated with each card are stylized and intertwined to create vivid sigils for each combination. The effects range from electrifying to hypnotic. 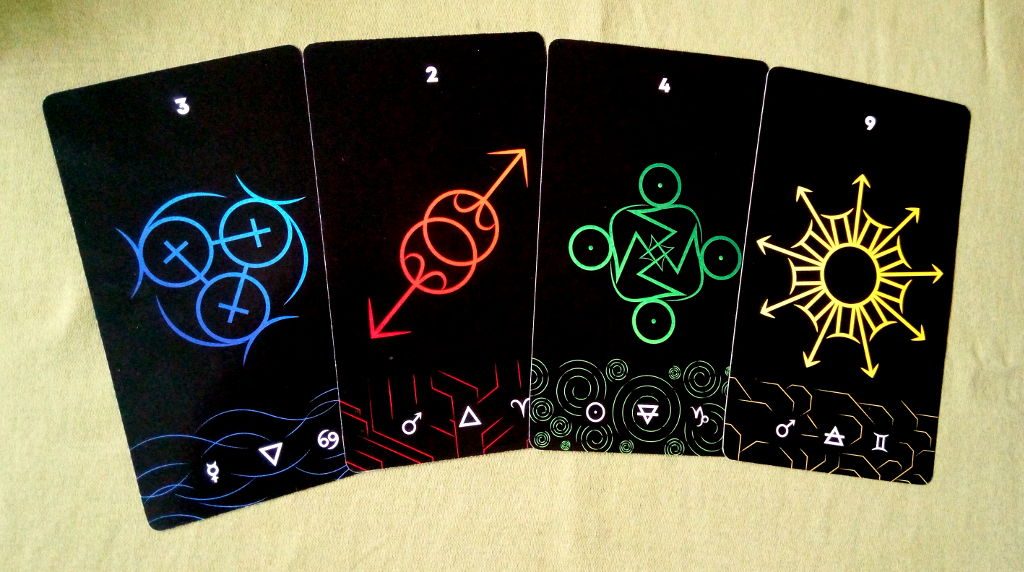 In the 3 of Water, for example, Mercury and Cancer are intertwined in an intimate dance. Sometimes, the cards suggest movement or energy emblematic of the meanings behind the card. This is evident in the 2 of Fire, where Aries and Mars are superimposed into one sigil, while the two sigils seem to be straining to escape each other, symbolizing the hunger for growth. 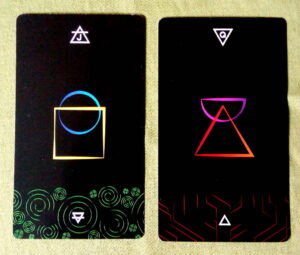 Each suit has four court cards — King, Queen, Jack, and Page — indicated by a single initial. Their design is more subdued and simple than the pips, but in their simplicity they still carry interesting meaning. Each suit is represented by a geometric symbol that corresponds to both suit and element. Atop this is a smaller symbol to indicate the card itself. Right away, this makes it easy to spot that the Queen of Fire symbolizes water in fire, for instance.

The Minor Arcana is filled with interesting design choices that definitely show that Taylor knows his way around a Tarot deck, but the Major Arcana is where the Sigil Arcanum really shines. These cards will make you think. Each Major Arcana is numbered with no title visible, and Justice is 8 while Strength is 11. 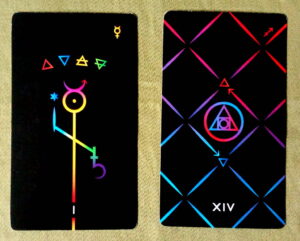 In some, the meaning is pretty easy to see, though even with the stark designs, there are secrets to be revealed. In the Magician, you can see the symbol of Mercury and the four elements. The main figure is also giving the traditional “As above, so below” sign. However, when you look closely, there is more going on in this image — for instance, the sign of Saturn is held below.

Other Major Arcana are more complex and require some thought to really wrap your head around. One of my favorites is Temperance, represented in reds, purples, and blues in a geometric pattern. At first, this card left me puzzled, but it wasn’t long before I started to see meaning that had been embedded in the symbolism of this card.

I really like this deck. It’s not a deck that I will understand immediately, and that is great. There will be more insights coming out of it as I spend more time with it. It’s obvious that Taylor Bell didn’t create this deck for beginners. The symbolism is deep, profound, and sometimes just hinted at by the simplicity of the line work. It’s also a powerful tool for getting a better grip on the astrological symbolism behind Tarot.

The cards are well-constructed on sturdy stock. The printing is crisp and clear, and the black backgrounds are nice and rich. These cards are so black that the white edges of the cards can be a bit distracting. I think this could be fixed by edging the deck with black ink, and I’m going to try that with mine!

If you would like to get a copy of this deck, check it out on Kickstarter and lend your support!