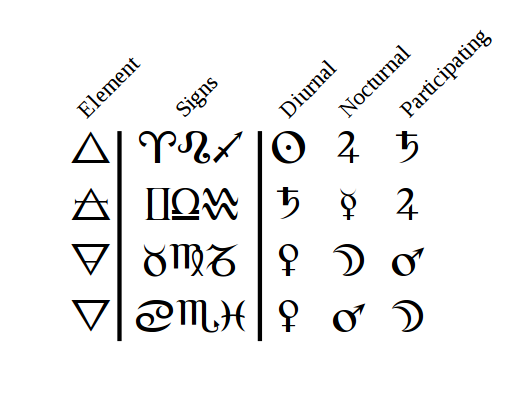 The triplicity rulers of the signs and elements

Here are the topics associated with the house triplicities.1

Let’s look at how house triplicities are calculated. We will look at Salvador Dali’s chart using whole sign houses to keep things simple. 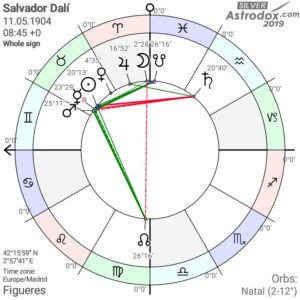 First, we see that this is a daytime chart, so we look at the diurnal triplicity sign rulership. Cancer is a water sign, so the primary triplicity ruler is Venus, the secondary Mars, and the participating ruler is the Moon. From this, we see the following.

I’m not going to try to interpret what all of these mean, because I focus primarily on electional astrology and am currently crap at natal chart reading. But now that we know what house triplicities are and how to calculate them, it’s time to sigh with tired exasperation as we realize there are thirty-six more astrological tidbits to memorize.

Using the Art of Memory

But never fear! The Art of Memory is here! Let’s look at how to use the Tree, one of Bruno’s thirty seals, to create a mnemonic structure for this collection of topics.2

The tree works like a chain, where each subject on the chain leads to a new chain of subjects. In computer science, this would be akin to a linked list of linked lists, or an array of arrays. You can conceptually look at it like this: 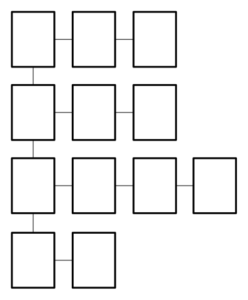 For the “trunk” of the memory tree, we need a collection of twelve images that are easy to remember and access. They should be visual and they should incorporate movement. The stranger these images are, the better. And, as the old teachers of the art of memory frequently instruct us, images that invoke emotion are the best.

At first, I thought about using the twelve signs of the Zodiac as memory images for this set of twelve. However, I quickly abandoned that idea because mixing other astrological data with the information we’re memorizing here would cause no end of confusion. In addition, the symbols and images of the Zodiac are reused so often for other purposes that their mnemonic value here would become confused and muddy.

Instead, I decided to base this mnemonic device on my favorite holiday song, “The Twelve Days of Christmas.” The words are easy to remember, and if you don’t have them memorized, you can learn the song. Each item on the list can be used to create a vivid and moving image. Their order is built into the image, as well. Holiday songs typically have emotions associated with them, which can help the images remain in the memory structure.

Here are the memory images in order, taken from the song lyrics:

The first step in creating a memory tree for the house triplicities is to take some time going through these twelve items and creating a linked chain of vivid images with them. Remember to make the images move, give them exaggerated and ridiculous characteristics, and try to associate feelings and emotions with them.

When Bruno presented his chain mnemonic for the signs of the Zodiac, he listed all of the images needed as well as the interactions that tied them together.3 When I presented my chain mnemonic for the twelve houses, I followed his example. However, the house triplicities are a more advanced mnemonic, seeing as how they include not just a chain, but approximately 48 imagenes – 36 for the triplicity topics and 12 for the days of Christmas. I think creating and sharing images for all of these would be a poor idea for several reasons. First, this is an excellent learning opportunity and a great way to practice the creation of images for yourself. Second, it would take forever, and I’d never finish writing this article.

Instead, I will share examples for the triplicity topics for the first two houses, and then you can figure out the rest.

The topics for the first house are youth, middle age, and old age. You already have an image of a partridge perched in a pear tree, perhaps singing its song or preening itself. Maybe it’s in a nest. Now to remember the topics, try this: 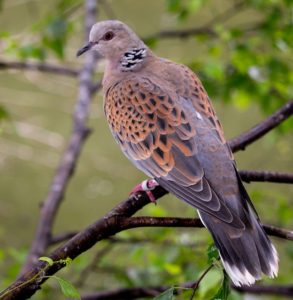 The topics for the second house are wealth in the beginning, middle, and later parts of life. You already have an image of two turtle doves – which are real birds, by the way. To remember the topics, try images like this:

You can continue along this line for each of the twelve houses. For example, perhaps the three French hens are all related, and maybe the four calling birds involve a real estate deal. These topics are going to have associations that will be individual and strong to you, so use those associations to guide your creativity and imagination. Just remember the basic rules for images:

As you create your image chains for each house triplicity, remember that the images need to relate to each other to create a strong link. Good luck on your mnemonic journey, and let me know how this works for your Astro-Mnemonic practice in the comments!

Many thanks to Dorje Kirsten of Heart Astrology for double-checking my astrology and making sure it was correct.