Working with Giordano Bruno’s memory alphabet and wheel system opens up interesting possibilities. I’ve written before about using tarot with the Art of Memory. Now let’s look at using the Taro with Bruno’s memory system. If you have used Tarot for meditation or pathworking, then you already have experience with visualizing the cards and also changing or manipulating the imagery. Using the cards in a memory system will imprint their symbolism even more firmly in your mind.


For this exercise, I will be using the Major Arcana of the Waite-Smith Tarot,1 primarily because it’s a common ground that almost every Tarot user is familiar with, but also because the card images for the 1909 deck are in the public domain.2 Which reminds me, I’m going to be including some chopped-up images in this post, and I ask you to please forgive my poor image editing skills.

In this description of the memory deck, we will use the term subject to refer to the background of the card, which would be called the locus in a traditional memory palace. The term adject will refer to the image placed in the subject. You should be familiar with the basics of a memory palace before tackling this exercise.

Creating the Subjects (or Loci) 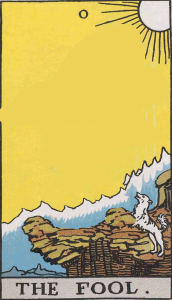 The Fool card without its main character makes a suitable subject or locus.

Before using our memory deck to store information, we need to create it. This is done by memorizing each of the 22 trumps of the Major Arcana in order, without their primary characters. For instance, the Fool card without the Fool in it is a treacherous mountain path with a small yappy dog. With some of the Major Arcana, it might be difficult to decide which is the main character and which is part of the background. Later on in this article, there is a table that can help you make the decision.

Your goal with this part of the exercise is to have the background cards firmly fixed in your memory, in order. You should be able to move through them in your mind quickly and accurately. It will probably take some practice to accomplish this. Bruno suggests that it can take about four weeks of daily practice to fix a set of subjects in your memory, but if you are using a familiar Tarot deck, this will probably happen much faster. 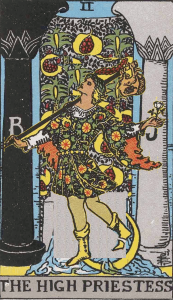 The Fool as an adject to the High Priestess subject highlights a problem with contrast.

There are a few cards you will want to watch out for. For instance, one of the big rules is that you need to have contrast between the background of the subject and the adject you place on top of it. In particular, the High Priestess, the Empress, and the Sun have busy backgrounds that might interfere with this. For example, look at what happens when you place an adject of the Fool onto the subject of the High Priestess. The Fool’s tunic is lost in the pomegranate-filled background. This can be solved by changing the background in your memory deck. Try using a solid color or hiding the pomegranates in shadow while keeping the foreground brightly lit.

It’s also important to make sure that the subject is brightly lit. Pay attention to the Hermit, the Devil, and the Tower, all of which might be too dim without their adjects to keep them lit. You need the adjects to be easy to see and observe once you place them.

Creating the Adjects (or imagenes)

Bruno’s adjects follow a Person-Action-Object system. This mean that each adject consists of a primary actor, with a distinctive possession, doing a distinctive action. Each of these three elements of the adject symbolizes the same number, sound, or letter in the adject system. In the table below, I have broken up each of the adjects for the 22 trumps into a Person, Object, and Action, and then indicated the number, Hebrew letter, and phonetic sound they represent. As with the subjects, it is important for every adject to be distinct in each of its three parts. I have noted in the table where this might be a problem, but you will need to play with the system to figure out what works for you.

Since the Major Arcana only provides 22 subjects and adjects, it is not going to be the best for remembering English words verbatim. You can still use it to remember things phonetically. However, it is particularly well-suited to memorizing Hebrew. As a bonus, the act of committing the adjects to memory is good practice for memorizing the Hebrew alphabet and their order.

Let’s look at an example. We will create compound adjects to recall the first line of Genesis 11, the story of the Tower of Babel. We will remember words by just memorizing the first three letters of them, which should be enough to get started.

And the whole earth was of one language, and of one speech.

In the first subject, which would be the blank Fool card, you would place the Fool. However, instead of skipping along with his bindle, he will be lounging with Death’s black flag. This will remind you that the Fool is “A”; the black flag belongs to Death, or “N”; and finally lounging belongs to the Empress, or “D”. Together, that spells “AND”.

Skipping the article “the”, the next image goes with the blank Magician card. Here, you will place the Emperor holding the scales. The Emperor belongs to “H” and the scales are those of Justice, or “L”. This might be confusing, because “HL” doesn’t spell anything. However, phonetically it should remind you of the word “whole”.3

Finally, the last word in this example goes onto the blank High Priestess card. The adject will consist of the Devil (“E”) carrying the long, flowing banner of the Sun (“R”), and then wrestling with it (“Th”).

The images are intended to be ridiculous or to otherwise really incite the imagination. Because of this, you might need to shift things around a little bit. For example, instead of having the Emperor just holding the scales, he could be actually in the scales being weighed. Again, you will have to play around with the system to see what works best.

Once this system is used a little bit, you will run out of subjects. Luckily, there are 56 other cards in the Tarot deck to work through! Here are a few ideas to get you going.

After using every subject available in the deck, remember that there are hundreds of other decks out there to pick from! With experimentation, multiple memory decks can be created. This tool should be well-suited for memorizing esoteric information, such as tables of correspondences, magical alphabets, or even the meanings of different divinatory systems.

[…] In addition, I would recommend reading my other articles on this site, Giordano Bruno’s Art of Memory and The Tarot Memory Deck. […]

[…] cards both a planet and sign correspondence. With just a little extra work, this can be used as a Tarot mnemonic. For a thorough discussion of how Tarot corresponds with the decans and other astrological topics, […]