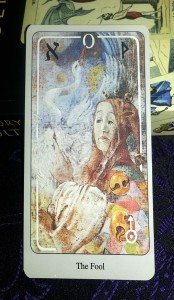 “Prithee, nuncle, tell me whether a madman be a gentleman or a yeoman.”
The Fool, King Lear, Act III, Scene 6

This week, we’re talking about The Fool. The deck I’m referencing is one I don’t use very often, The Haindl Tarot. I was just putting the deck away when this card slipped out.

The Fool has a very interesting history in esoteric and occult Tarot usage. In A History of the Occult Tarot, Decker and Dummett go into great detail about The Fool. For a long time, nobody could really agree on where this card fit in the Major Arcana. Some placed The Fool between trumps XX and XXI. Some placed it after XXI. When it came to Hebrew letter attributions to the card, sometimes it ended up with alef, sometimes with shin, and sometimes with something altogether different.

Even the imagery in the card has been up for debate. In early versions of the Golden Dawn’s esoteric Tarot, for instance, The Fool was depicted as an old man. His younger counterpart only became popular with Pamela Colman Smith’s depiction in the Rider-Waite Tarot.

I often refer to The Fool as the clueless Magician. This card speaks of a new beginning, but it’s a new beginning without any idea of what’s in store. It’s not knowing necessarily what to do next. In fact, its relation to The Magician is even stronger. Let’s talk about the Kabbalistic significance of alef (The Fool) and bet (The Magician). The first word in the Torah is be-reshit, “In the beginning.” This word is spelled with a bet. The significance is talked about in the Sefer ha-Zohar. Though bet is used to begin the act of creation, the Creator says to the letter alef, “Although I will create the world with the letter bet, you will be the first of all the letters. […] With you all counting begins and every deed in the world. No union is actualized except by alef.”1

Though The Magician, as bet, has all of the tools necessary to begin the transformative journey, nothing can begin unless it begins in The Fool. That clueless ignorance, the bumbling nothing at the start of a quest, that is very important.

The Fool is typically represented by a jester. In the Haindle Tarot, the Fool wears the jester’s cap and bells. More bells seem to be floating in the foreground. Historically, jesters had liberties with their words that others did not. Supposedly, Elizabeth I once rebuked her favorite jester because he didn’t say harsh enough things about her. Jesters could act like madmen and get away with it. They could appear insane to others, and were expected to do so.

James Ricklef paraphrases Thoreau when he describes The Fool: “Do not be afraid to march to the beat of a different drummer.” This ties into the concept of everything beginning at The Fool. When you try something new, you might appear mad. You might be doing something nobody else has ever done before. It’s time to go for it.

An interesting commentary. I’ve not thought of the fool as being the clueless magician. I am confused by your explaining. One point you describe him as a new beginning, but not without understanding what to do next. In another section he is described as the clueless ignorant. How do I reconcile these two aspects?

Is the real aspect that of the fool has a new beginning in front of him that might seem as madness, but it might just signify a new path for you to take?

Second question – where do you put the fool? At the front as the “0” card or at the end?

Good observation. I should have explained that more clearly. When the Fool starts the journey, he might not realize that he’s ignorant. It’s not until he becomes the Magician that he realizes that he was once ignorant.

Sometimes I look at the Fool as being on the wrong end of the Dunning-Kruger effect. If you haven’t heard of it, check it out: http://en.wikipedia.org/wiki/Dunning%E2%80%93Kruger_effect

Oh, and to answer your question, I put the Fool at 0. However, there was an occultist who put the Fool at 0, just after The World and just before The Magician. He read the greater arcana as an endless cycle. I like that interpretation.

Unfortunately, I can’t find the guy’s name at the moment, but it’s somewhere in Decker and Dummett’s book.

[…] Lovers is the 7th card in the Major Arcana, so it’s number VI, because we start counting at zero with The Fool. As I frequently point out during tarot readings, every six is about love in the Tarot. Sometimes […]