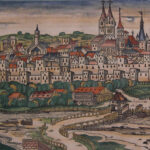 Welcome to the first episode in a series that will be exploring the content, message, and ongoing influence of Heinrich Cornelius Agrippa’s magnum opus, De occulta philosophia libri tres, better known in the modern world as Three Books of Occult Philosophy. In this series of episodes, I will talk to experts, translators, historians, and magicians to unravel the secret of this book of secrets, as we figure out not only where this important book came from, but why it has had such a lasting impact on the world.

If we want to understand Occult Philosophy, we first need to take a look at the world in which Agrippa lived. This episode will begin by looking at the Holy Roman Empire, where Agrippa was born and spent most of his life, and then examine a few key historical topics that are relevant to Agrippa and Occult Philosophy, including:

Finally, this episode will give a general overview of Three Books of Occult Philosophy and outline a general plan for this series of podcast episodes.

This series of episodes about Occult Philosophy will most likely last until Summer. My Patreon supporters will be receiving each episode a week before the rest of the world, along with bonus materials such as full interviews, a glimpse at works in progress, and the opportunity to suggest further topics for this Agrippa deep dive.

If you enjoy these episodes and want to help support their development, you can help out by sharing this podcast with a friend! Let your weird wizard buddies and witch pals know that we have embarked on this journey. And if you want to contribute monetarily, you can go to the Support page on this website and find a number of options.

This episode includes quotes from Douglas Batchelor, host of the What Magic Is This? Podcast, and Eric Purdue, whose translation of De occulta philosophia libri tres was published by Inner Traditions in 2021.

This episode included music by JuliusH from Pixabay, along with Celebration by Alexander Nakarada. All music was licensed under Creative Commons: By Attribution 4.0 License.