The third Decan of Aries covers the 20° through the 29° of that sign. This year, it lasted from the 9th to 19th of April. This Decan is ruled by Venus, which makes for an interesting combination since Aries itself is ruled by Mars. If you are familiar with the mythology surrounding these planetary deities, I am sure you are already thinking of many interesting implications even before we get to the Tarot card. That card, by the way, is the Four of Wands.

2021 has brought an interesting April to Portland, Oregon. There has not been enough rainfall. The temperature has been quite high, and during this Decan in particular it has been hot and dry. It makes me worry about this summer. Will we face wildfires as bad as last year’s?

The Four of Wands 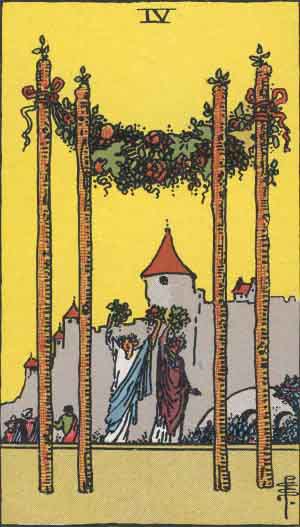 This card is so comfortable, especially following on the heels of the explosive confusion of the Three of Wands. In the Waite-Smith version of the card, the four wands are propping up decoration, perhaps for some sort of celebration. It’s easy to interpret this celebration as some kind of wedding; the two figures framed by the wands wear leafy crowns and appear to be celebrating together. However, they hold aloft three bouquets and aren’t even touching. Their colors don’t seem to indicate a wedding, either. What is happening in this card?

Fours are cards of relative stability after the expansive growth of the Threes. In the active elements like Fire and Air, these cards can be welcome places of rest. Here, we are presented with a card that is filled with emotion even as no big changes are happening. Perhaps this is a place where the querent feels happy, where things are secure, where a marriage of opposites produces something stable and long-lasting. The dynamic, ever-changing fire of the Wands stands still for a period.

The Decan for this card is ruled by Venus, and the sign for the decan is ruled by Mars. These planets are the equivalents of the Greek deities Aphrodite and Ares. Aphrodite is the goddess of beauty and love, while Ares is the god of war. These two had a troubling relationship. In the image for this card, we see a swarthy, smaller figure in a reddish brown cloak, next to a taller, fair figure in blue and white. Could they represent the tumultuous union of these two deities? If so, they are a warning that the stability of the Four of Wands is temporary. Change is still coming.

While working with this card, I meditated on the Four of Wands from the Dracxiodos Tarot. Here, I realized that the four wands were not just there to hold up a canopy of greenery – they were a gate. But where does that gate lead? Again, the suit of Wands is not a suit of sitting still. We are pulled onward into further change. Nothing remains the same, but sometimes you do get to take advantage of a rest stop.

The Third Face of Aries

A restless man, holding in his hands a gold bracelet, wearing red clothing, who wishes to do good, but is not able to do it.1

The image for this card is striking, and unlike the image in the Second Face of Aries, the Picatrix and Agrippa mostly agree.