In this spooktacular podcast episode, Montana Jordan joins me for a live Ouija board session. I really don’t want to give anything away about our session — let’s just say that we make contact, and it’s an interesting contact. Even more interesting is that we set up the Ouija board in my ritual space, and Montana has some stuff to say about that, too! Montana also shares some very special news about an upcoming project.

Listen to our special Samhain-Halloween Spooktacular, my friends, and enjoy!! By the way, the intro is remixed with some piano by me.

I first met Ingrid Kincaid in 2017 when she visited my Masonic lodge to give a lecture on Yule and ancient Northern European traditions. Her name kept coming up in conversation after that as many of my friends and associates told me I should talk to her about runes. I finally reached out to her and we met in her home to record this podcast episode in the shadow of her giant mounted caribou head. 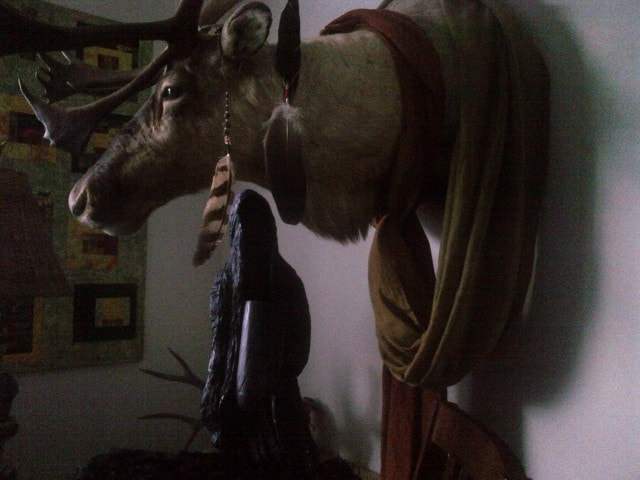 Ingrid Kincaid has been studying the runes for 40 years. She has published two books on the subject. Her expertise is held in such high regard that she is known as the Rune Woman. In this episode, Ingrid and I discuss her unique approach to the runes and to ancestral knowledge. We talk about how she discovered the runes, what wisdom they have brought her, and how her ongoing work with them has changed and influenced the world around her.

Coleman Stevenson of the Dark Exact joined me at the Rose City Book Pub for a live podcast recording, and it was great! We filled up the venue and more than forty people were in the audience. We talk about Tarot, art, the process of creation, creativity, cats, and all kinds of great stuff. The Q&A session with the audience was particularly invigorating.

Recording and sound was done by my very talented brother, Nick Arneson. Go check out his music!

This was our first live recording and we didn’t always do a great job getting the microphones to some of the questioners! However, overall this was a great event and I look forward to doing another one.

Through all of my writing on Hermeticism and Hermetic philosophy on this blog, I’ve recommended a number of books. In this post, I’ll pull them all together to create a reading list for those interested in the subject.
END_OF_DOCUMENT_TOKEN_TO_BE_REPLACED

This episode, I’m joined by Scott Stenwick. Scott has been practicing ritual and ceremonial magic for more than thirty years. He has published two books on the subject of Enochian magic and is a longtime Ordo Templi Orientis initiate. He has maintained a blog since 2006 on which he has published many of the so-called secrets of modern ceremonial magic in the interests of free and open inquiry. In addition to his Enochian series, he has written several works of paranormal fiction and contributed anthology articles on various magical topics.

As you can imagine, our conversation gets into some great stuff, including models of consciousness, the role of ritual, operant fields, and then also a lot of Enochian. It’s a wild ride!

This year has seen a lot of changes for this website. When I launched the Arnemancy Podcast in June, I also gave myself my first reading with Aleister Crowley’s Thoth Tarot deck. I attempt to interpret it in that podcast episode, and it’s worth a listen. However, now that it’s been a few months and I’ve heard some feedback about that reading, it’s time to revisit my interpretation.
END_OF_DOCUMENT_TOKEN_TO_BE_REPLACED

Scott Gosnell joins me for an amazing conversation about Giordano Bruno‘s work, in particular On Magic and Thirty Statues, which he just finished translating and publishing. Our conversation dives into Bruno’s art of binding and his suggestions on how to bind entire cities. We also get into the crazy world of the Florentine Renaissance and explore the stories of Savonarola and Machiavelli.

Among the twos, the Two of Cups is my favorite. My preference for this card probably comes from its amazing depiction in the Rider-Waite-Smith Tarot, which portrays a man and a woman staring into each other’s eyes. Meanwhile, a freakin’ massive winged lion head atop a caduceus seemingly sprouts from their clinking cups. This card has a certain ease to its appeal. You can look at it quickly and just think, “Oh, there are two people.” It’s after a few moments that the eyes boggle and the mind begins to rebel at the crazy combination of symbolism exploding out of this card.
END_OF_DOCUMENT_TOKEN_TO_BE_REPLACED

S01E06 Tarot and the Art of Memory
Solo Episodes

Welcome to the first Arnemancy Podcast solo show! In this episode, I talk about how to use Giordano Bruno’s table method to memorize the Tarot’s Minor Arcana pip cards. This mnemonic method can be a very effective method for not only recalling card meanings, but to understand the relationships between the cards.

Here are some of my past blog posts about Tarot and the Art of Memory:

Learn more about my first live podcast recording on Friday, September 13th, with Coleman Stevenson of the Dark Exact!

Vanessa invited me to be a guest on her podcast, Butterflies and Incantations! We had a talk about magical practice, current projects, strange philosophies, and other fun stuff. Here’s part of her show notes:

Vanessa and Erik have a fun little conversation about magick, crafting, tech magic, astrological talismans and other such things. Plus we get interrupted by JESUS! Plus a surprise bigfoot!

Be sure to check out the original here! Also, go back and check out my interview with Vanessa on My Alchemical Bromance.